And The Southern Strut

What an amazing decade the Sixties was, for the world  and the PFA

It started with the Cuban Missile Crisis when for several days we were expecting the world to come to an end in a series of Nuclear explosions; they called it “Mutual Annihilation”.  Our “V” bombers were armed and fuelled ready to be Scrambled as in the Battle of Britain, Mary Quant designed the Mini Skirt, women got the Pill, ’63 the Beatles arrive, JFK is assassinated, the Great Train Robbery, ’64 the Rolling Stones arrive, the world is full of Austin Minis with the Union Flag painted on the roof, TSR2 is cancelled, ’66 England win the World Cup, Nelson Mandela goes to prison, Martin Luther King assassinated, the UK is preparing for Decimalization and the Americans go to the Moon.

Many of us know and love the Piltdown fly-in. But is did start as a small tea and bun fly-in at Danehill. Picture is me talking to ex prime minister McMillan who’s family owned the land and rented a farm to George who we all know. McMillan was a pilot and knew about aircraft.

The sixties saw big changes and advancement within the Popular Flying Association (PFA).  The annual International Rally had been arranged by a mixture of aviation associated groups under the banner of the Royal Aero Club.  The PFA realized that it was doing all the preparation and running of the rally, under the stewardship of David Faulkner- Bryant better known as DFB so DFB stepped in and took over the rally as a PFA venture.

The first total PFA rally was in 1965 at Sywell and was the first rally in the series of “Flying For Fun”.  Just under two hundred aircraft arrived.  On the field catering was provided by a plumber from Brighton who had built an Autogyro without an engine and would get airborne by being towed.

In the sixties the PFA was run by a small group of volunteers based at Elstree.  The 1966 September magazine only has one name in the front, Robert Goodall as Managing Editor. By mid 1969 there is a fairly normal complement of names with a President, a Chairman Frank Parker B Sc, who lived in Woking so that was the office, John Walker was Engineering Officer, only two other members as part of the Committee.  A key man was Magazine Editor Stuart McKay who latter formed the Moth Club and was awarded an OBE for his contribution to aviation.

1979: First fly-in at Lelystad. My Jodel D11 ‘Moby Dick’ next to DFB’s Curry Wot. As you can see, hardly any grass. It now has a hard runway and must be avoided.
The PFA were asked to fly in to prove to the Dutch officials that home builts were safe as at the time home-building was not allowed in Holland.

There were twelve members running the PFA at this time all unpaid. Our local lad DFB was the area rep for Sussex, Surrey and Kent and was the person you phoned to get information about the PFA; no Internet then.  He was soon co-opted  onto the committee and then became Local Representative Secretary.  While in this post he was contacted by a Turbulent builder in Uckfield who needed an inspector so DFB contacted Ken Frip at Lasham and a meeting was arranged.  DFB had a friend, Ken Browne who had a Turbulent at Redhill so invited him along as well.

1980: The Strut fly-in at LEC’s airfield at Bognor Regis. The barbecue was supplied by LEC.

When the inspection was finished the builder Roy Watling-Greenwood, Ken and DFB went for a drink in the local pub.  They thought it would be a good idea to keep in touch so a meeting was arranged in the Haywards Heath Hotel (now the car park),  with their wives for a meal.  As you might guess this was not very conducive to aviation chat so another meeting was arranged in July 1969 at the King & Queen pub in Brighton with a few more members being invited along; about eight altogether.  So this was the first meeting to be called a Strut.  However as a meeting it was also not too successful as it was a very busy pub.  So a month latter a room was hired at the Railway Hotel just outside Brighton Station, with more members turning up from far and wide and as they say “the rest is history”.  Within a few months there were more Struts as members who had been to Brighton went back to their areas and started their own struts.

In the ’90’s I was running the trophies and awards at the rally. I decided that all home-builts should get some recognition. I copied the Dutch idea of issuing a bronze medal with the aircraft registration engraved on it. The photograph shows me, Mick Welch, Alan Dunn and Alan’s helper.

At Sywell  ’71, the Air Squadron Trophy for the Best Homebuilt was awarded for the first time, the first name engraved on the trophy is Roy Watling-Greenwood from Uckfield, this aircraft G-AWDO is still flying from Deanland I think.

The Strut system became the backbone of the PFA with better local organization and strut members who took on jobs like chairman, coordinator, treasurer etc.  joining the Executive Committee.

The Southern Strut moved around to two other pubs before meeting at Shoreham Airport.  At that time the PFA office was at Shoreham, so the strut became more and more involved with PFA work.  In 1972 DFB became chairman of the PFA so the head office moved to Shoreham with a room being rented as the office, a postal address and as a store for John Walker and the Permit Aircraft records where each aircraft’s records were stored on a card; no computers then.  The cards were about 7″x 5″ the registration, builder, type, engine, prop etc. were recorded on one side, the annual renewals and mods on the other side.  The cards became this size as John had stored them in shoe boxes under his bed. 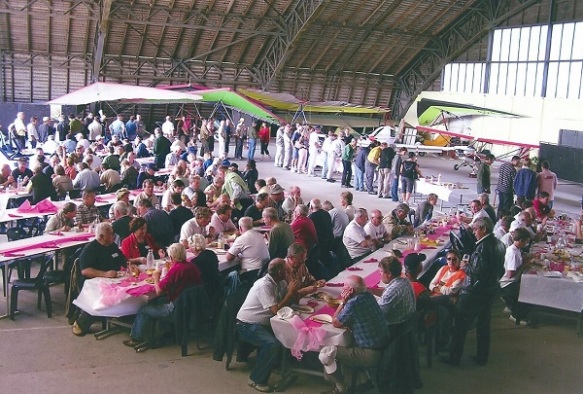 Struts organized Fly Ins around the country which all helped the growth of the PFA.  For many years the first Fly In of the year was the Southern Strut’s at Shoreham.  On Whit Monday in 1972, the only record I have, 52 Aircraft flew in with 8 local defenders for the Breakfast Attack between 9 and 9.30.  If you could get over the airfield without your registration being recorded by one of the defenders you would get a free breakfast at the struts expense.  There would be two defenders on each side but they had to operate singly. To avoid your registration being read you had to keep them behind you to stop them seeing your side which meant constantly turning away.  Once when attacking Middle Wallop a defender chased me for several minutes and when he finally let me go I was totally lost until I suddenly saw ahead Winchester Cathedral and quickly turned north up the railway line.  Shoreham was a friendlier place in those days.  At the fly in we held a timed navigation contests and a spot landing contest.

A few members of the strut had a key to the office so that post could be collected and sent on.  The magazine was also run from Shoreham.  A phone was installed to be manned from nine to eleven each morning, AND THEN Jenny Pothercarry was asked to open the office each day for which she was paid, and so became the first person within the PFA to be paid, after almost twenty years of being run by members.