This year held at the Old Tollgate, Bramber on 5th December 2018.  Here is the photographic evidence:

Good time had by all – apart, perhaps from the Xmas Quiz.  Mea culpa; I was too bloody clever by half with the questions.  On the night I had trouble working some of them out myself, and I wrote them!  Having said that, one team did manage to get 18 out of 25.  Here are the results:

For those that don’t believe there was such a thing as the Westland Welkin, I got the names from this excellent Wikipedia page, en.wikipedia.org/wiki/List_of_aircraft_of_the_United_Kingdom_in_World_War_II  where you can click through to detailed descriptions of each aircraft.

We have started the engine build at long last. We had lost the bar of phosphor bronze that we had purchased for making a new set of exhaust valve guides but found it a couple of days ago, so we are now progressing making the guides. The crank components were laid out and all the tolerances and clearances were checked per the engine data sheets. The steel engine components had all been sent to Deltair for NDT so the dimensional checks and visual checks were all that was left to do.  We had to find our way around the build with regard to special tools required but that appears to be coming clearer as we move on looking a few steps ahead all the time. The crank has been put together now and we are looking into fitting the crank into the crankcases.  It is quite complicated and some of the design details in the 1930’s were not very well thought out.

We have had some appalling weather with the river flooding twice but the strip here did dry out for one day and I managed to get a flight in the Bristell on the 14.12.18, but the heavens opened the day after and the river has flooded at least twice again. See pic. The Tiger when it was used from 1948 to 1954 had its gear changed every 6 months: winter saw it with ski’s and summer: floats.  If the river stayed flooded consistently then it might make
sense to get floats (and get the wind to blow straight down the strip/river).

Don Lord has written an article about Paul as he had known him most of his professional life but I would like to say a few words.  A fair number of years ago we could not get any one to produce the newsletter and Paul stepped in and he his wife then took up the position of news editor.  I used to drive across to liaison with them and met a young Charlie (his son) and daughter; it was great that he cared enough about the strut to go that extra mile to help the local aviation community.  Our condolences go to his family and his girlfriend Clair.  We should be glad that we had a chance to say goodbye at the Xmas dinner only 3 weeks ago and that he did not suffer over many years.  When I spoke to him at the strut meeting a month before, he was concerned that he may not make it to the Xmas dinner but thank goodness he did!  I imagine that the funeral will not be for a couple of weeks but we will advise.

GASCO safety evening at the Swiss Cottage on 6th March 2019

Tell everyone who would benefit !! 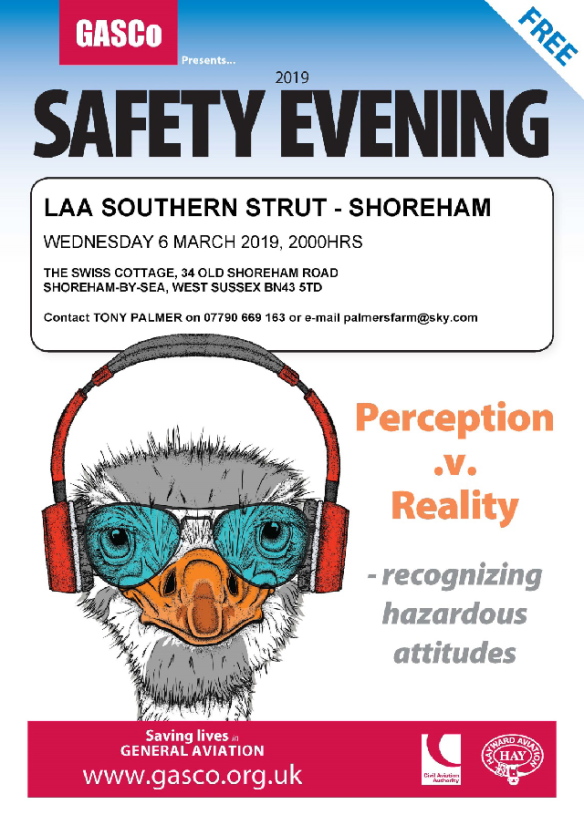 Paul at the Strut Christmas Dinner

I am writing this on Christmas Eve to let members know that yesterday evening I received a phone call to tell me that long time strut member Paul Cave had passed away that morning.  Paul was a long time friend and working college of mine.

I first met Paul around 1970 when he came to work with me as a camera assistant on a documentary film, we worked together many times after that mostly on TV commercials which was my main work.  It was not long before we discovered we were both pilots, he had flown and got his PPL at Popham on a Microlight and had bought one with a partner. He flew with me a few times and gained his PPLA.  He was one of four who joined with me as partners in a Vagabond.

We worked together until I retired in 2001. Very sad. RIP.

Parachutes don’t save lives: Research published in The BMJ

A paper just published in a prestigious medical journal, The BMJ entitled: “Parachute use to prevent death and major trauma when jumping from aircraft: randomized controlled trial” [BMJ 2018; 363 doi: https://doi.org/10.1136/bmj.k5094 (Published 13 December 2018)] rigorously tests the hypothesis that wearing a parachute when jumping from an aircraft is better than wearing an empty backpack.  Perhaps surprisingly, it turns out that it isn’t!

Here is their conclusion:

Parachute use did not reduce death or major traumatic injury when jumping from aircraft in the first randomized evaluation of this intervention. However, the trial was only able to enroll participants on small stationary aircraft on the ground, suggesting cautious extrapolation to high altitude jumps. When beliefs regarding the effectiveness of an intervention exist in the community, randomized trials might selectively enroll individuals with a lower perceived likelihood of benefit, thus diminishing the applicability of the results to clinical practice.

So perhaps it may be wise to continue to take your parachute with you (if you have one) when venturing more than 0.6 metres from the ground.

Spoiler alert!  I think think this may be an Xmas festivity inspired joke…

In case you need some Christmas post-prandial reading, here are a couple of weighty documents recently published relating to GA.   The Government have brought out a green paper entitled: Aviation 2050: the future of UK aviation.  It can be read online here: https://aviationstrategy.campaign.gov.uk/

The general aviation (GA) sector covers non-scheduled civil aviation. It includes, amongst other things, business jets, pilot training, emergency service flights, as well as private flying. The Aviation 2050 consultation sets out how the government proposes to enable, facilitate and encourage growth in GA, and indicates where it thinks that GA itself should seize the initiative and capitalise on those opportunities.

Just like buses, you wait a while for significant GA policy consultations to come along and two turn up at the same time.  The CAA have just launched their New Airspace Modernisation Strategy.  You can read about it here: https://www.caa.co.uk/News/New-Airspace-Modernisation-Strategy-launched-to-overhaul-UK-airspace/

Both of these initiatives will impact on our interests, for better or ill.

Advertisements appearing on this page are supplied by a third party and we have no control over them.