Engine:- We have completed the drive side of the engine which included installing the centrifugal oil filter/damper internally on the crankshaft and we installed the reduction gearbox. We intended to leave the engine during the summer months and concentrate on the paint and fabric because of working with cellulose products in cold damp conditions is not ideal. So with that in mind we have started on the fuselage paint. We investigated how the original plane had been painted (we have sections of the original) and we gleaned from this that the panels were not covered with fabric as some people have done but only had 2” tape over the wood joints. We followed this method and should save a fair bit of weight while keeping the paint to a minimum. 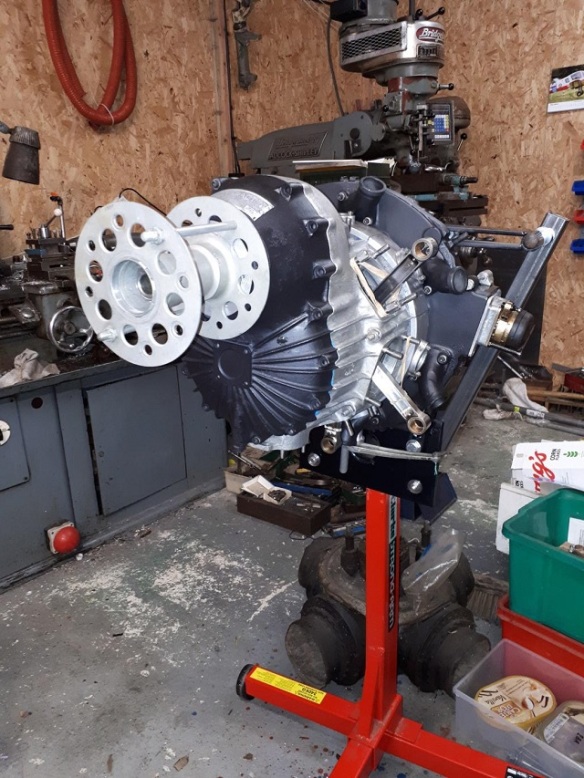 Don’t forget the Palmers Farm fly-in is on Saturday 3rd August 2019.  Put it in your diary.

We were charmed with good weather on the day with a good crop of arrivals. We must thank Ann, Ian, Yvonne and Farry for a great spread of food and for organising it (a lot of work is involved as well as expenditure).

Farry did his normal thing of taking people for rides, some prospective Bristell buyers, some just curious and 2 grandchildren.

Below is a series of pics taken by Ann.

The latest list has been published here: CAP 1606: 8.33 kHz voice channel spacing in the UK: Common sporting and recreational assignments including Safetycom (downloads as a pdf).

It can be viewed here:caa.co.uk/General-aviation/Safety-information/The-Skyway-Code/

The latest version of PilotAware Conspicuity Aid is now available

If you are a PA user, chances are you will already have heard this.  If not, then here is another reason for you to become a PA user… 🙂  The new version includes updates to:

PilotAware version 20190621 is now available for download from pilotaware.lode.co.uk.

PA will soon be providing a service to supply SD cards with the new software pre-loaded.

60  Years of the Southern Strut

Following on from last month, a bit more from Don on the history of the strut. 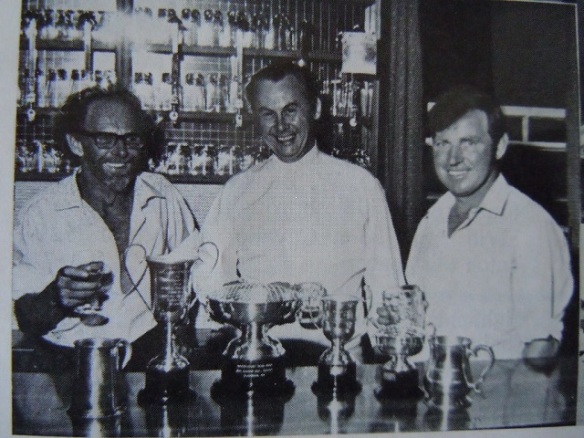 Once David Faulkner-Bryant (DFB) had set-up the first Strut a few more interested members were invited to the next meeting, they went back to their area to form a Strut and within a year there was a Strut in most parts of the country and each one bred another. 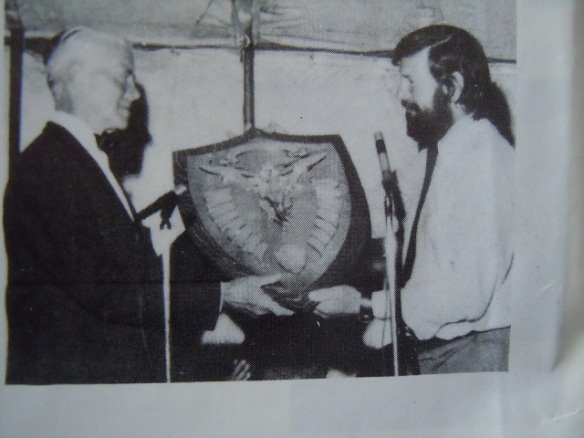 DFB receiving the Strut Shield for the Southern Strut 1977

The Southern Strut moved around a bit renting a room above a pub, members attending contributed by putting half a crown (two shillings and six pence, one eighth of a pound) into the kitty.  The Southern Strut soon became involved with thePopular Flying Association (PFA) office at Shoreham, often being asked to help with some of the tasks the staff had.  At that time the staff was John Walker and his secretary.

Before having an office the engineering records were kept at John’s home under his bed.  The records of each aircraft were kept on cards about 6.5” x 4.5” as this was the size of a shoe box.

Many home  builders came into the Struts as this was the place to get an answer to a building problem.  Within the Struts members became co-ordinators, treasurers, newsletter writers etc, which made them more willing to get involved within the Executive Committee running the PFA.  Struts began to organise their own Fly Ins at a local strip; when Shoreham was a friendlier place we had our annual Fly In there, starting with a Breakfast Attack, and including Navigation Contest, and a Spot Landing Contest.

Struts became more involved with the annual rally at Sywell, DFB had a list of tasks and Struts would offer to cover a task, in the late 60s and 70s all the work at the rally was done by volunteers. 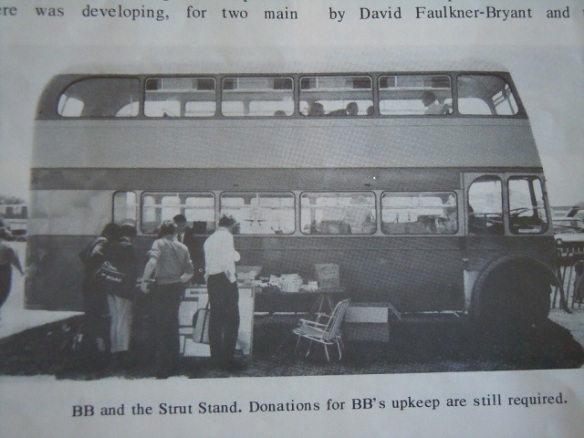 The Berkshire Bus at Sywell 1972