Meeting on Wednesday in the main restaurant at 8.00pm-social only

As you all will know Alan Weal was tragically killed about a month ago and we will remember him in our own ways, he was always fun with that mischievous grin on his face. I did not know him as much as a lot of you did and I would welcome any little memories you had with him that you might like to share with us. When the dust has settled perhaps you can come up with any ideas about someway of keeping his memory alive.

Terence Henderson a fellow BA pilot who flew Concorde will be doing an ‘ALAN WEAL MEMORIAL LECTURE’ on 2.11.11and will generally talk about Concorde and other aviation stories with a Question and Answer session with slides etc.

The Southern Strut Scilly fly out was this weekend. It coincided with the St Mary’s fly-in and a free landing from an aviation magazine. The planned group was a bit depleted and was reduced by 50%. Brian Williams was stuck in Wales because the weather was too wet on the Friday and because of the rain forecast over the Sunday/ Monday decided not to come down direct Saturday. Chris Simpson and Jerry Dawe took off on the Friday but turned back as the visibility was poor. Dave Sketckley and Gary went down in Dave’s PA28 G-ATIS and Farry and myself went down in G-WOOO(Jab powered Sport cruiser). We stopped at Dunkerswell for an allday breakfast and Dave and Gary turned up while were there and watered there as well. We left for Perranporth with weather that did improve a bit but as we approached Perranporth the cloud ceiling was 600’ and the airport elevation is 300’ it did not leave a great deal of space.

We both landed and tied down and got a taxi to our respective Hotels, Farry and I went for a paddle in the sea. In the evening we went out for dinner together and another Sportcruiser pilot (John Massey) flew in and joined us for dinner and drinks afterwards and bedded down in our B&B.

Next morning we were up early for breakfast and checked the weather on my phone it seemed to indicate that the mist/low cloud over Perranporth would clear about 9.00 which it generally did. We all went up to the airfield together in one taxi, fuelled up and John left first as he had an early slot, we followed next and then ATIS. The scattered cloud was still a pain but it got better and we coasted out at 3500’, we arrived at St Mary’s just in time to see John having another go after a go around. We all landed and signed in and got a taxi to town. John, Farry and I just got there in time to catch the ferry to Tresco where we walked for a few hours, had a drink at the hotel and went into the SUPER market called Tresco Stores. We returned on the 14.30 boat and got back to the airport put on our gear and flew off into the glorious blue sky. The cloud layers over the mainland were a bit of a pain coming home but we made it direct to Chilsfold International in about 2 hours 30 mins, tired but it was enjoyable.

Dave and Gary have produced the following Video.

The Scillies come into view 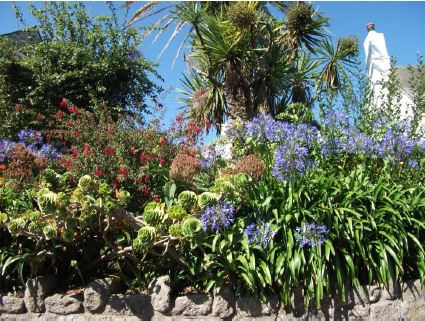 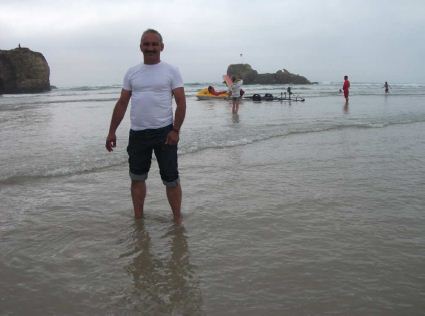 Farry Paddling at Perranporth (without hanky)

I visited and airshow in Finland last week a report next month with pictures from Aero expro at Sywell. Don’t forget the Shoreham Airshow on the 20/21st of August.

Directions to the Flyin including food at PalmersFarm

The postcode is BN27 4AT but only use it to get to the approx location, get to the Boship roundabout and drive South towards Eastbourne go down to the next roundabout called Diplocks and turn thro 180 degrees and head North and start slowing down at the 200 yd board before the Boship Roundabout and then turn left just before the 100 yd in the entrance with the Palmersfarm sign on the wall. Drive for about ½ mile up to the building (the gate will be unlocked but please close it behind you as we have sheep) and park up by the side of the metal barn and make your way across to the house.  Phone for directions if lost. Food will be served from 12.00 onwards, I doubt if it will be a BBQ as such because we are not BBQ people. We might have a raffle if people want to bring a small item with the proceeds going to a deserving cause.

To fly-into the event you must be invited and have received a briefing.