There will be no club nights for the foreseeable future; we will inform you once the restrictions are lifted. Might be possible soon but not everyone will feel comfortable coming for quite a while.

We will be having a simple fly-in at Palmersfarm on Saturday the 1th of August. Bring your own picnic (inc drinks) and blanket to sit on. We will not have any food or tent this year. Eat by the plane and keep a sensible distance when you are talking to others. Abide by whatever rules are current at the time.

We have started the project again. When we were on lockdown the registration letters arrived. We had agreed to letters that were totally custom as per the old pics we had, so  we decided to go the ready-made route as opposed to masking tape and painting them on.  The original were brush painted and looked like it!  I had made up the letters from scratch and sent them to the printers and as the printers are local he delivered them to my gate. One of the first jobs back was to have a go at putting the fuselage letters on; it all worked out fine see pic. The plane is unusual from today’s reg. layout as it has about 1 metre high letters on the top of the wings as well as underside; that will be fun fitting them.

All the rubber fuel pipes were installed about 14 or 16 years ago so would be out of date and they seemed to be hydraulic hose which may have been OK for Avgas??  But as we do not know in the future what fuels will be available we went with the highest spec pipe available now i.e. J30G9 which is Ethanol proof.  We will initially run it on UL91 but who knows what will be available later?  So we pulled out the 2 fuel tanks and disconnected all the hoses and noted the routes and clips etc.  Ebay was used to purchase the pipe, the ½” ID return pipe from header tank to main tank had to be brought separate as I could not find that size in the spec above but it was Ethanol proof and under about 2 psi max in use.

The hand painted main tank had slight corrosion in places so we cleaned up the bad bits and sprayed red oxide and painted it with black 2 pack to help its long life. We refitted the cushion straps and installed the new pipes and the tank is now back-in waiting for its first drop of fuel. This part of the project was left to now as fitting the engine is imminent and the clock starts now for the fuel system. 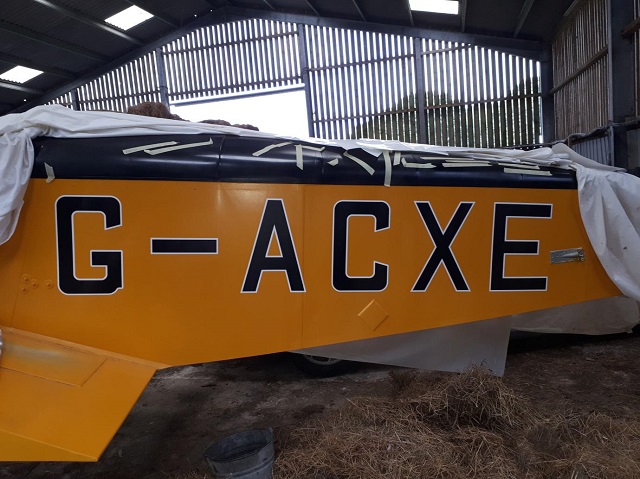 We will be making a custom cover for the fuel filler.

Last month I had covered the installation of a completely shielded ignition system and I can report that it seems to have done the trick.

Microlights now up to 600 kg

Executive Summary
▪ This paper outlines the CAA’s response to a consultation undertaken in Autumn 2019 on whether the CAA should directly regulate categories of aeroplanes, helicopters and sailplanes of a greater weight than currently allowed by EU regulation.
▪ The proposal is for the UK to consider an ‘opt out’ from current European regulation in favour of national regulation. In the consultation, we asked whether the UK should opt out of this provision, and for aeroplanes, if these should be defined as ‘microlights’ or as ‘light sport aircraft’.
▪ We received 1,379 responses, of which 91% (1,254) supported the opt-out choice. Based on this feedback, we undertook further analysis which has also led us to the following conclusions:
o Aeroplanes: exercising this opt-out would increase the weight boundary that currently exists between national and EASA regulation from 450 to 600kg. We believe this would improve the availability to the UK market of many modern light two-seat single-engine aeroplanes that are currently certified up to 450kg Maximum Take-Off Mass (MTOM) but may be capable of operating up to 600kg MTOM. This streamlining of regulation should enhance the aeroplane market, and the benefits include modernising, refreshing and enlarging the UK light aeroplane fleet for pilots, operators and businesses.
o Sailplanes: we do not intend to opt-out for sailplanes. There were no strong views expressed in the consultation, there was no inflexibility created by the current regulation of the sort we identified for aeroplanes, and we recognised that opting out would unintentionally deregulate a proportion of two-seat sailplanes. Finally, any benefits could be realised through other regulatory means.
o Helicopters: we intend to opt out for this category. The UK does not currently have a sub-600kg helicopter fleet, so although there are no existing market distortions, there are no unintended consequences either, and opting out would permit future development of this market with minimal regulatory changes.
o Aeroplane category choice: we intend to develop a revised ‘microlight’ definition, rather than introduce a new light sport aircraft category. This was strongly supported in the consultation, and we recognise that this choice would be simpler to implement in both legal, airworthiness and flight crew licensing terms.
▪ We are now developing a plan to implement these regulatory reforms at the earliest practical opportunity.

So if CAS is NOTAM’ed closed, what does that mean?

I had this very issue on a trip west of Southampton.  Solent CAS was NOTAM’ed closed with some possibility of opening at short notice.  Deciding discretion was the better part of valour, I creped under, Beaulieu to Stoney Cross, squawking 7011 and listening out on 120.230. Someone else on the radio just announced “entering controlled airspace” and went for it.  Just after, the Solent controller came on air to announce that the CAS would open in a few minutes.  The guy already in the airspace was told to carry on track, so no big deal.  However, this situation has caused a number of infringements in different places.  The NATS Airspace Safety Initiative has put up a web page to clear up any misperceptions.  You can read it here: airspacesafety.com/updates

EASA recently launched an external promotion campaign for their new website that can be seen here: easa.europa.eu/domains/general-aviation  Lots of useful information; enjoy it while we are still members….

Due to retirement I am unfortunately having to sell my Pietenpol Aircamper A65, G-BXZO. Permit 23 July 2020. Looking for offers in the region £10,000.