Tony does a wheelie: Report on the LAA English Wheeling course

On Saturday the 20.1.17 I was up early and heading North to LAA HQ at Turweston through lots of rain.  It took less than 2 ½ hours to get there and there was tea waiting for me but no milk at first.  I then found out that one guy was from East Sussex and another from the Horsham area so we could have saved some fuel and had someone to talk to and make the journey go quicker.

Justin Baker and a Slinfold resident in the background

The course was due to start at 9.30 and I was about 30 mins early, but there were two others before me.  We all appeared in due course and put our badges on. The lecturer/instructor John Ricketts had a very quick chat and it was straight on with it.  We picked our machines (we had one each) and the first job was to align the lower roller with the anvil top roller, which was but a couple of minutes.

Our first project was to form a double curvature shape in 1mm thick carbon steel.  This was to learn about marking a frame around the outside which would be the section that we did not stretch.  We learnt about controlling the wheel, how much force to have dialled in, how to start off and many other knacks of the trade.

We had lunch from 12.30 to 1.00 in the restaurant and then it was back to the wheeling and a new project.  This was to be 1050 aluminium alloy 1mm thick sheet, a pre-cut tear-drop shape which would be a typical “power “bulge on an engine cowl. We learnt that it worked quicker than steel and how a set of polished wheels made a much better finished product than one with brand new unpolished wheels. Outside it snowed quite heavily for a about an hour and then turned back to rain.

We had lunch from 12.30 to 1.00 in the restaurant and then it was back to the wheeling and a new project.  This was to be 1050 aluminium alloy 1mm thick sheet, a pre-cut tear-drop shape which would be a typical “power “bulge on an engine cowl. We 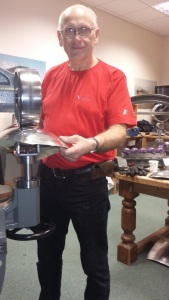 Me making the blister

learnt that it worked quicker than steel and how a set of polished wheels made a much better finished product than one with brand new unpolished wheels. Outside it snowed quite heavily for a about an hour and then turned back to rain.

Justin Baker who designed, makes and sells the English wheels that are demonstrated at the LAA show every year was there to help with the instruction, but the main instructor was John Ricketts (alias THE QUIET BEAR ).  They were both very good, but John has been doing for a few years and just instructs now.  If you want him to come down to do a day’s instruction, he will come to you with his two machines for £250 a day plus fuel.
And then it was another few hours back home.

American take on Flying in the UK

For those that haven’t seen this on social-media; a bunch of young American guys on a round the world flight.  This video captures the trip from Wick to Shoreham.  The commentary is amusing if you appreciate the insouciance of youth.

Tony has been working on restoring a 1946 Aeronca Chief over the last five years with help from Javid Azadi.  He is now based in the top-hangar at Swanbrough Farm airfield.  (The trip there was documented in the March 2015 newsletter.)

G-AKTK is Aeronca Chief 11AC, but now modified to 11BC configuration with a bigger dorsal fin and bigger engine.

The engine is a C85 with Aeronca pipes. Original was an A65, but the 11BC model had the C85.  The engine has been completely rebuilt. 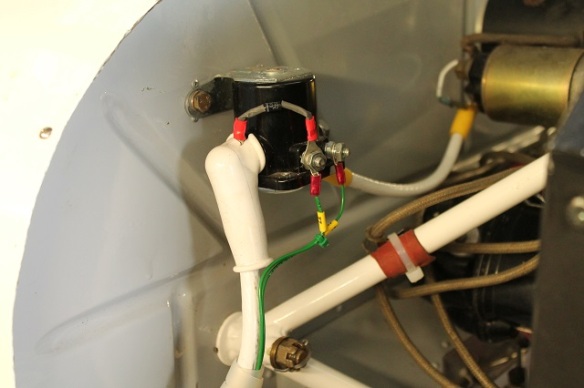 The starter relay; all wires tagged with their numbers from the wiring diagram .  The diode is to control induced reverse current spikes.  It took a bit of research to identify this solution to blown fuses. 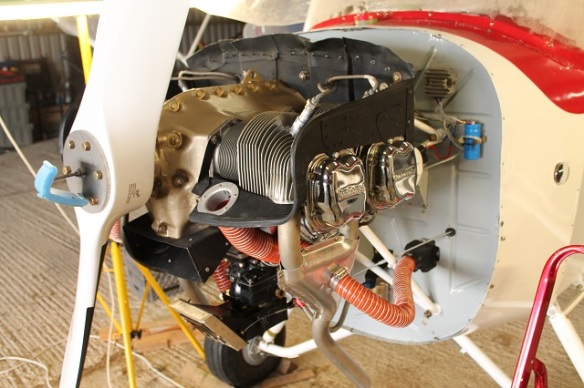 The engine has a B&C alternator with the rectifier and capacitor mounted on the firewall. 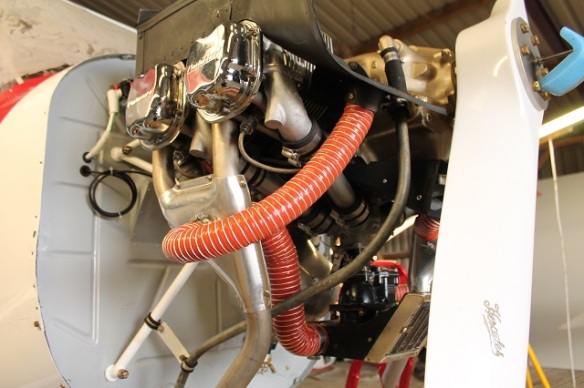 Aeroncas use a heater muff around the ‘Y’ junction; this one is for the carb heat.  The pipes are stainless.

Tony has added a full wiring harness.  This is the fusebox, circuits named on the cover and if a blade fuse goes the red LED will light up.

The Chief only has five dials – all the switches, the trig TR91 and the voltmeter are in the glove-boxes; when parked the glove-box doors will cover all evidence of these additions, maintaining the period aesthetic.

The frame was stripped and painted in two-pack.  The covering is Poly Fiber.  All cables are new 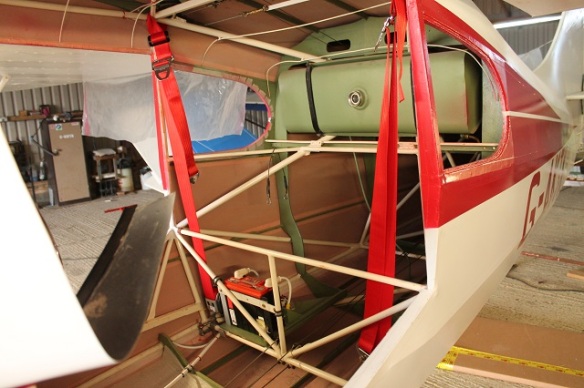 The original seatbelts were lap straps. Tony has added inertial reels for better protection. The battery is an Odyssey PC680, mounted behind the seat for protection and W&B.  Testing its security in this location involved simulating g-forces using strap tensioners.

Tony’s corner of the top hanger at Swanborough; three benches and lots of boxes.  Working on this aircraft required a fair amount of space.

The proud owner after five years work.  Prop is a wooden Hercules, painted in the aircraft’s colours.  First flight is immanent, the most likely delay factor being the condition of the runway.

Tickets for AeroExpo, 14-16 June 2018 at Wycombe Air Park are now available on-line.  Responses to last year’s show were a bit muted, but that just reflected the overall GA situation in the UK.  If events like this aren’t supported, it won’t get any better.  Looks like there is some sort of airshow scheduled for the 16th.

Interestingly a picture of our very own Farry features in the publicity material.  That’ll bring in the crowds!

The future of Panshanger airfield is hanging in the balance – but saving the airfield seems to have a lot of local support; see this article in the  Hertfordshire Mercury.  You can sign the petition at: Change.org.