Seasonal Greeting to all Strut Members!

The Future Airspace Strategy VFR Implementation Group (FASVIG) has published a paper outlining its approach to addressing issues in the regulation of UK airspace.  The south east of England where we fly, must have some of the most complex airspace in the world, so this is not merely of academic interest.  The paper outlines FASVIG’s programme of work for 2018/19.  It makes some interesting comparisons with the way airspace is regulated in Europe and is an informative read.  You can download it as a pdf from here: http://fasvig.org/reports/uk-airspace-modernisation

This extremely active group has also published a Register of Significant VFR Airspace.  Check to see if your favourite bit of class G is on it:  http://fasvig.org/reports/mas-1-vfr-significant-areas

Why build a Plane when you can build a Rocket!

There was a bit of a fuss on social media a couple of weeks ago over the plans of “Mad” Mike Hughes, a 61 year old American professional limousine driver – and self taught rocket scientist.  He announced that he would launch himself in a steam powered rocket to prove that the earth is flat.  Actually he might not like being described as a rocket scientist – science is not something he has much regard for.  However, he does appear to have considerable engineering skills.  The YouTube video below shows a previous launch.  Hopefully he has improved on the spec of the recovery ‘chute before his next flight.

Mr Hughes seems to have been a late convert to flat-earthism;  it may have been motivated more by his need to up his Kickstarter project contributions to fund the build.  However, enough flat-earthers have contributed to make it possible.  The only thing standing in the way of his going for it, is a dispute with the US Bureau of Land Management who have a quibble over his using public land for the launch.  He doesn’t seem like someone who will let that hold him back for too long though.  It will be interesting to see if he survives into the new year.  Follow his exploits here: https://everipedia.org/wiki/mad-mike-hughes/

It seems that the Tollgate in Bramber has been the venue for the Strut Christmas Dinners for some time.  The photo below from 1987 shows Don Lord shaking hands with Maurice White, one half of the donors of the Beverly Cup.  Also in the picture is John Hughesman, part of the group that ran Fornier AZRM at the Burgess Hill strip.  On that occasion there was a presentation of the Pat Holms trophy to a young lady (Kathy?) who had flown solo UK to Australia – without being accompanied by a back-up crew! 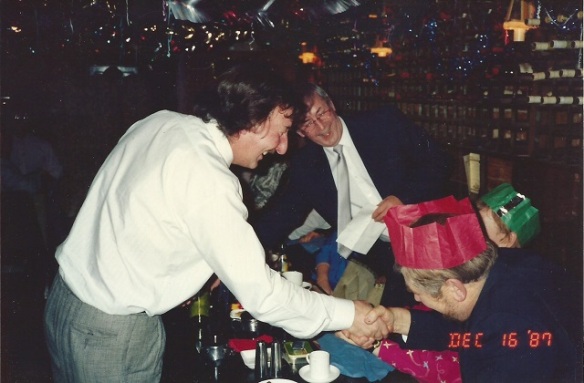 Have a Merry Christmas and a Happy and Safe New Year