On the theme of GPS is great … until it goes wrong, here are suggestions for integrating digital and analogue navigation.  Certainly worth a read if you use a GPS.

The guides are made and installed. The new exhaust valves have been installed and the seats ground in. We have most of a set of valve springs and I am hoping Francis Donaldson will be able to come up with 5 inner springs that are within spec and then the barrels can be completed. 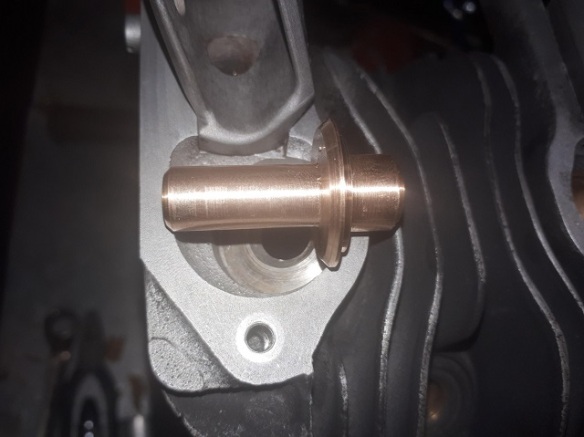 The crank components are now built and in the crankcases but not bolted up yet as we had a problem with the new gear that drives the cam-drum. The cam-drum drive shaft problem has now been cured.  Phil Tranmar has built up the old shaft and cut standard ½”x20 tpi thread on the end. The old thread was a very non standard ½”x14 tpi which was too coarse to give a good clamping force, it also gave smaller thread-core (weaker) and they had also hardened the thread, all reasons why the thread had sheared close to the base of the thread (it was also too short!!). The old scrap shaft had been reduced in diameter to enable it to be used it setting up the parts. This meant it had too much clearance in the bearings and the gears. We decided not to use a Loctite type product to lose this clearance as we could not guarantee it would run concentric, so we purchased a nickel electro plating kit and plated the shaft to increase the diameter. Typically It deposits about 0.001” per 5 hours.

The next problem to overcome was that the prop drive hub was not compatible with the front casting. The hub has a left hand helix oil-slinging groove which drives the oil back into the engine when running but weeps oil when stationary. The casting has a housing which has a felt oil-seal of 1930’s design. So we purchased a modern 50x62x7 lip seal, machined off the helix to give a smooth 50mm diameter and made up a doughnut housing which pushed into the old housing and carried the new lip seal.  Another slight problem was that the splines did not match up longitudinally.  A split collar was missing so I turned up a new one and modified the length slightly to help align the splines. The nut that holds all this together was missing so that had to be made and thread cut on the lathe (the first time I have done it in more than 50 years!!)

A fair number of the strut attended Toon’s funeral on the 22.3.19.  The funeral was well attended, filling the chapel twice over with as many people standing as sitting.

We went back to the Shoreham airport building afterwards to talk about Toon’s extraordinary life and give our condolences to his family and friends. Typical Indian finger food was provided and although I am not a lover of Indian food I tried most of the offerings and found them very good although one was very hot. The Airport had arranged a flyby provided by a Chipmunk and two T67’s at 3.45pm. The Evening Argus took a series of photos which can be seen on their site here.

GASCO safety evening at the Swiss Cottage on 6th March 2019

This was well attended with over 30 people and I think it gave the attendees food for thought.  I would like to think we all learned something or at least we were reminded of certain actions.  I transferred £100 to GASCO from club funds to help them continue their good work.

How safe is your harness?

Prompted by a fatal accident occurrence, the CAA have updated a Safety Notice: ‘SN-2019/003: Non-EASA General Aviation Aircraft Safety Harness Integrity’ aimed at maintainers of permit aircraft.  This is an update to the previously published SN2018/005 containing more input from industry experts. “The aim is to provide a greater definition of variables that affect harness integrity to aid in inspection by authorised engineers/inspectors.”

Not just Boing 737 Max!  Many GA types with electrically operated elevator trim are exposed to the possibility of trim runaway.  If you fly such an aircraft, have you thought through how you would cope if it happened to you?  The new UK Civil Aviation Authority safety advice on this makes compelling reading.

Download it as a PDF document  here: CAP 1774 Trim Runaway

Despite the local authority planning a compulsory purchase order for Wellesbourne Airfield, the aviation businesses located there have just lost an appeal against their eviction.  If you feel inclined to help them fight back, their appeal for support is at: crowdfunder.co.uk/SaveWellesbourneAirfield

In the middle of the Brexit shenanigans occupying the House of Parliament at the moment, the Prime minister got a question on a hot GA issue; the dispute with a neighbouring landowner to Eshott Airfield that is raising a pressing safety concerns.  Here’s a video showing the exchange on the All Party Parliamentary Group on General Aviation’s Twitter feed.  View it here: #APPG-GA

For Star Wars Fans: May the Fourth be With You (at Sandown)

Ever had a had a yen to dress as an astronaut while aviating?  Well here’s an excuse to indulge that fantasy.  To celebrate the opening of the Wight Aviation Museum at Sandown Airport on the Isle of Wight, there is a fly-in May 4th,5th,6th billed as ‘Sandown Space Weekend’.  Come as an astronaut, Trekkie, Wookie or some other sort of space-alien and the landing is free!

When I went there a couple of weeks ago, there were contractors busily laying AstroTurf on the runway.  Made for some excitement on landing as we only discovered that on short final! (And yes, we had phoned ahead…)  The airfield owner, ‘Dangerous Dave’ expects the innovative use of second-hand AstroTurf, previously a hockey pitch, will solve the winter water-logging there.  As I have washed thick mud off the aircraft after a previously winter visit, it seems an extremely good idea.

There is plenty of other activity planned at Sandown.  Visit the airfield website for more information here: Isle of Wight Airport Sandown