We have been busy on the engine until Jim had to stop coming due to the virus situation.  Jim has been making the ignition leads and when Jim was down in Wales helping out with his daughters lambing I had had mostly finished the welding of the exhaust system including adding the loops for the retention springs.

The next major item was the air diverters which live between the cylinders and push the air that would normally whistle between the pots around the cylinders to aid cooling as the fins on this antique engine are a bit on the small side but hopefully balanced to the heat output. See pics.

Air diverter viewed from the flat side

The centre one is the pattern, the top right is the prototype and the piles are the start of production. The bracket is the first production one in titanium 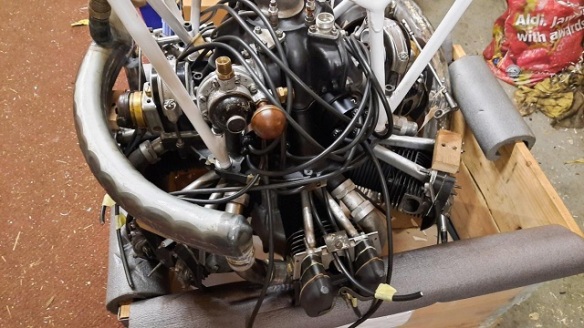 The start of the high tension leads, there are a fair number

New project to keep me busy while stuck at home

How do wings work? Even Einstein couldn’t crack it!

A recent issue of Scientific American carries an article on the controversy in aerodynamics as to an intuitive explanation of how wings produce lift.  Fortunately not having an agreed explanation doesn’t stop it working anyway!  Choose your favourite here: scientificamerican.com/article/no-one-can-explain-why-planes-stay-in-the-air/

Having finished off restoring his beautiful Aeronca 11AC back in August 2018, Tony Batchelor has now got a more contemporary aircraft to work on.  He has bought a partly completed Vans RV6 kit from the States. 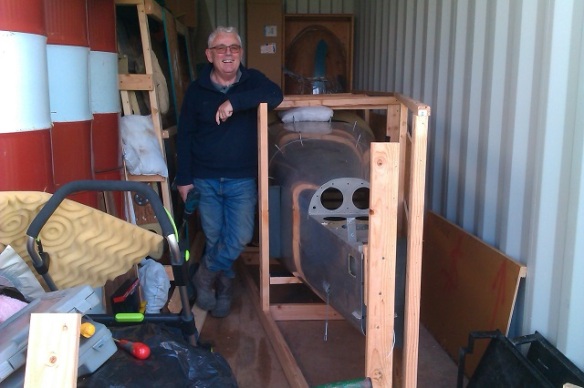 First job was getting it out of the packing case to see just what he had bought.  The engine bearer had to be mounted on the firewall so the undercarriage could be attached.  Then it could be towed to the workshop.

Tony says that so far the work already done looks OK and most of the parts are with the kit.  He’s unpacked all the boxes and there doesn’t appear to be much missing, although time will tell.

He has started work, firstly removing the flat plate under the tailplane as one of the supporting brace bars was badly drilled and outside allowable tolerances.  He will get another from Vans and then rivet it back in.   The tailplane is also not well done, it is not possible to order another kit but he is in discussion with Vans about whether one from another model would fit.

So we know what he’ll be doing during the Corona Virus lock-down.

From LAA CEO re: Extension of Licensing and Medicals

Received from Steve Slater the CEO of the LAA it effects all pilots in the UK. [TP]

To all Struts and Member Clubs

You may already have seen this advice on the LAA website and Facebook pages and in other social media. If you haven’t do please take a look and feel free to pass it to other Strut members.

We are also working with the CAA on extending licensing and medical dates at the moment, as there is likely to be a shortfall of instructors and examiners to validate licences and AMEs to catch up with a backlog of medicals once restrictions are lifted. These extensions would enhance safety by allowing pilots to maintain or regain appropriate currency more quickly, keep flying and remove a potential instructor/examiner shortfall. The same applies with medical requirements, as a six month deferral would again facilitate pilots maintaining a valid licence and proficiency, with minimal safety loss and significant safety benefit by minimising the loss of flying continuity and currency. We’ll keep you up to date on progress on this.

The combination of developing power technology and new materials is seeing some extraordinary new designs for personal air transport.  The GoFly Prize, sponsored by Boeing is $2 million competition to ‘make people fly’ – essentially for ‘flying motorcycles’.  The final fly-off in the competition was due at the end of February, but in the event was weathered off.  However, the competition website is worth a look – though the old expression, “if it looks right it will fly right” might need rethinking for some of these.  See it here: goflyprize.com

In case you haven’t already seen, there are a flood of CAA Notices relating to the COVID-19 situation and Brexit related.  Here are a couple of particular significance to us.

In response to the exceptional circumstances caused by the Covid-19 outbreak and in line with the European Union Aviation Safety Agency (EASA) guidance, the Civil Aviation Authority (‘the CAA’), exempts all operators, aircrew, instructors, examiners, aircraft maintenance licence holders and air traffic controllers for whom the CAA is the Competent Authority, and wherever normal revalidation facilities are not available from the normal validity periods for licences, certificates and ratings that expire before the 31st October 2020 subject to the conditions in the exemption.  https://publicapps.caa.co.uk/docs/33/ORS4No1354.pdf

The CAA has updated its consolidation of Regulation (EU) 923/2012, supporting EASA Acceptable Means of Compliance and Guidance Material, The Rules of the Air Regulations 2015, supporting CAA Permissions and Exemptions plus related elements of the Air Navigation Order 2016.

These updates can be found at www.caa.co.uk/sera and reflect the imminent expiry of the UK’s General Exemption from aspects of the Class D airspace VMC.

The consolidation also reflects changes to several other General Exemptions to reflect this expiry.

Updates to general advice and useful links have also been published at www.caa.co.uk/sera

Will’s talk covered the technical intricacies of flying the YAK3, where speed control and engine management are crucial.  Also the complexities of the pneumatically actuated undercarriage need to be mastered.

But the technical issues paled into insignificance when the financial commitment to keeping the aircraft flying were disclosed.  Some of this is offset through display flying, and Will outlined how he had developed his capability in this.

I hope that the Corona virus problem is not going to wipe out many air shows this summer and that we will get a chance to see Will in action (perhaps Eastbourne), with the added appreciation of what has gone into putting on the display.

Details of Will’s aircraft can be found here: warbirdaviation.co.uk/Profiles/yakovlev-yak-3/