Its that time of year again when RV owners go on their annual RV fly out. Last year was to Croatia, this year was a little closer, Minorca off the Spanish coast. The planned route was La Rochelle, Carcassonne, Ampuriabrava and San Luis Minorca.

The decision was to leave the UK on Wednesday 17th May and fly to La Rochelle but on checking the weather on the Sunday evening it looked like heavy rain over the south of the UK and NW France for the Wednesday so the decision was made to leave a day early and get down to La Rochelle before the weather set in. We were airborne from Swanborough Farm at 8.00Z on the 16th and called London Information to open our flight plan, which took us via St Catherines Point  routing through D036 which Plymouth Military gave us a clearance to enter at 3500ft. 20 minutes later we were in French airspace and speaking to Deauville. We decided to stay at 3500ft and enjoy the view arriving in La Rochelle 2 hours 30 later after travelling 327 miles, averaging 130 knots. After tying the plane down, it was out with the ipad to find somewhere to stay overnight in the city centre. That evening we found a great restaurant within walking distance by the marina. 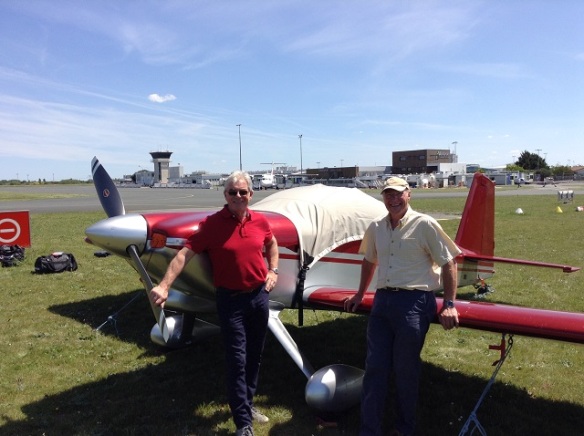 The plan was to stay in La Rochelle until Thursday as it’s a great city to explore and people watch, then fly down to Carcassonne to meet up with the other nine RV’s. Keeping one eye on the weather, we decided to leave after lunch, due to deteriorating weather, and planned in a few weather diversions on route in case they were needed. We decided to fly low level 2000ft and enjoy the view, arriving at Carcassonne 2 hours later, averaging 126kts, with a cloud base at 3000ft. On arrival we were met with winds at 20kts gusting 35kts, luckily down runway 28, so landing was OK but taxing to the parking area definitely concentrated the mind. We tie G-RISY down into wind to permanent tie downs, that was the easy part, we then had to put the canopy cover on in the wind. There were several RV’s already there so we jumped in a taxi to the Ibis Hotel where all the others were staying, by this time the wind was even stronger and accompanied by torrential rain. The old town of Carcassonne is a walled town where Robin Taylor the trip organiser had booked a Tapas bar for an evening meal. Problem 1. we still had torrential rain, high winds and a long walk to the restaurant. Problem 2. no taxis are allowed in the Old Town and it was too windy to use an umbrella, thankfully we all have waterproof skin. The evening was a great success in the company of 18 other RV’ers. 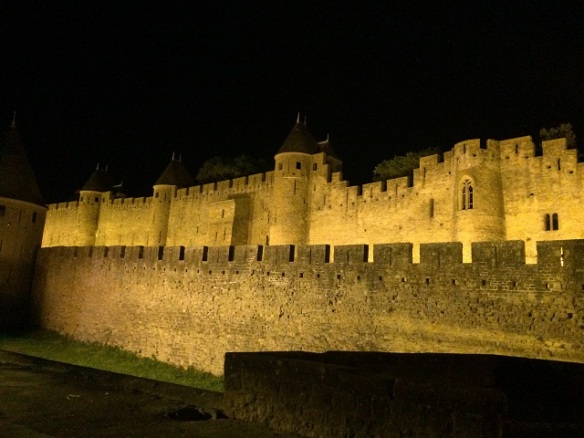 The next morning we woke up to blue skies but still very windy. The wind had gone through 180 degrees overnight so we decided to walk to the marina and have breakfast by the waters edge. Afterwards we all met up at the hotel and walked to the Old Town where we spent most of the day eating drinking and taking in the sites including visiting the famous Cathedral. The next day was a short flight to Ampuriabrava in Spain, so that evening we checked the weather and filed our flight plans for 10.00 local.

We arrived at Carcassonne airport to find several of the planes had damage to their rudders where the wind had forced the rudders over into the elevator although we had all put our locks on the damage was confined to inch long dents in the rudder skins on both sides. We assessed the damage and came to the conclusion both planes were flyable.

The flight to Ampuriabrava was a 50 minute flight. Ampuriabrava is the busiest parachutist centre in Europe and the radio is managed by the two pilots flying the drop planes, the briefing notes advised to be prepared to wait for up to 20 minutes for a clearance to land. The reason for using Ampuriabrava is it’s the closest to the Spanish coast and we needed to fuel up before the 65 minute water crossing to Minorca, there is no Avgas in Minorca, so we need to carry enough fuel for the return trip back to Carcassonne.

We all landed safely at Ampuriabrava and brimmed the tanks before sitting down outside the club house to watch the parachutist, there was never a minute where there were not at least half a dozen parachutes in the air, on one count there were 29, the place is full of parachute junkies. 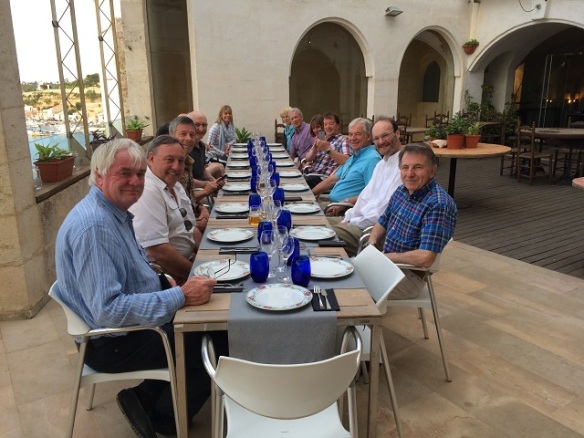 The hotel was on the site at Ampuriabrava so we all walked and booked into our rooms then 4 of us decided to take a taxi to the town. Richard Pike talked us into hiring an electric boat for an hour to go around the harbour;  there are inlets where people have built posh houses on the water’s edge. So the first stop was the supermarket for a few beers to take with us and ha ho off on another adventure in a boat this time. That evening we all met up in town at the pre-arranged restaurant to do more eating and drinking, followed by a 40 minute walk back to the hotel.

After breakfast in the hotel we decided to leave around 11.00 local for San Luis as its 65 minutes over the sea. We all spent time on thorough pre flight checks and as planned, at approximately 11.00 we all took off over a 15 minute period, the brief was to call Minorca at 2500ft 10 miles out from the island before entering the VFR designated area, fly down the eastern side of the island and then enter the eastern VFR corridor not above 500ft. All nine planes seemed to arrive at the same time at the designated area and most RV’s have RV in their registration,  after a couple of minutes with the controller at Minorca tower trying to sort out who was who and give arrival and landing instructions she gave up, asking us just to report as we landed at San Luis so she could close our flight plans. 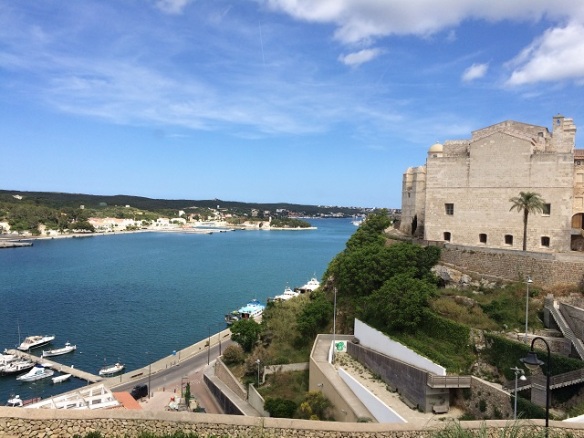 Robin came up trumps again with the hotel Catalonia Mirador Des Port sitting high on the cliffs overlooking the port of Mahon that we were all booked into for three days. During that time we did all the usual tourist things, glass bottom boat trip for half a day, a coach trip around the island for a day and a morning exploring the town. Robin had also booked a different restaurant for each evening and the rest of the time was spent sitting by the pool with the odd beer. I would thoroughly recommend the island for anyone looking for a few days away, its beautiful, clean and the people are very friendly. The time flew by (pardon the pun) and soon it was time to say goodbye, file our flight plan to Carcassonne for lunch and an overnight stop in La Rochelle, leaving in the morning for the UK. 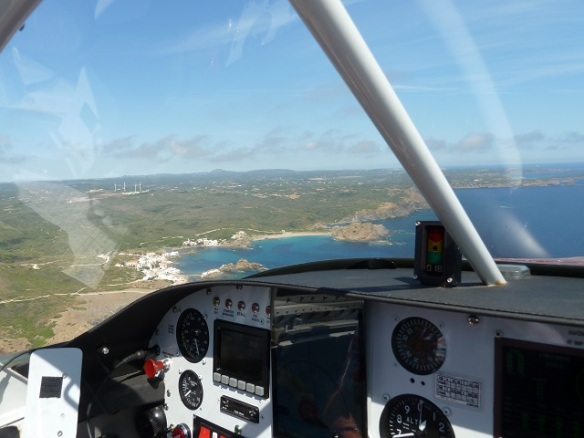 The CAA runs a Mid Air Collision (MAC) working group as part of CAA and Stakeholders combined effort to reduce the risk of mid-air collisions for aircraft operating VFR. Electronic Conspicuity was one of key areas the MAC WG wished to explore so the group formed a sub group, the Conspicuity Working Group (CWG) to progress matters on this front. I represent FASVIG at the CWG meetings.

A lot of the focus of CWG has been on longer-term initiatives such as CAP1391, which seeks to encourage the development of new portable ADS-B conspicuity devices. This is all fine but in my view insufficient focus has been paid by the CAA on maximizing the cost-effective use of existing Mode S ES transponder technology that can already broadcast ADS-B Out traffic information. So following the December 2016 CWG meeting I volunteered to write a paper highlighting the obstacles preventing cost-effective use of Mode S ES ADS-B Out and what I saw as ‘Quick Win’ actions that could increase usage of Mode S ES ADS-B Out hopefully within the 2017 calendar year.

My paper, which was delivered to the CAA on 31st January 2017, has now been published on the FASVIG website.

You can read it here: http://fasvig.org/reports/vee-5-ads-b-out-implementation

With appropriately equipped aircraft it is incredible what is now possible with regard to displaying nearby traffic on a moving map. But this relies on everyone broadcasting their position information. I would encourage you to learn as much as you can about ADS-B and equip your aircraft to broadcast your position via ADS-B. It is much easier and cheaper to do this in a Permit-to-Fly aircraft than a CofA a/c – see the following LAA documents:

This happened on Saturday 24th June 2017.  Low cloud in the south prevented some aircraft from coming, but there was still a good turn out including two French aircraft and one from North Wales.  The photos below show arrivals up to about 2pm, when I had to be somewhere else.  Click on a picture to enlarge it. 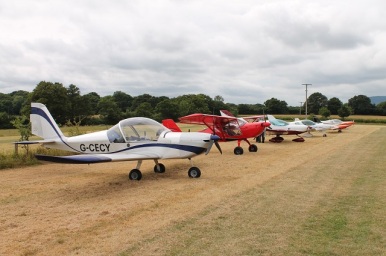 Many thanks to Ian and Ann Charlton and Farry Sayah for organising this friendly and fun event.

A Glimpse of the Future at Goodwood