16 club members went by bus to the Aeroplane and the Motorcycle show at the NEC. I got a few bits and pieces and then had lunch with some of the members and then went on to the motorcycle show with Phil Trangmar. Unfortunately there were quite a lot of scantily clad young ‘ladies’ which was of course not very pleasant for us, Phil had to put his glasses on to check how bad they were. As I am an engine nut and had thought about building a V8 out of two Jap four cylinder engines many years ago and then I had a chance to admire the two Suzuki Hayabusa engines stuck together to make a 360hp V8 of only about 2.7litre.

If you are going to the Xmas dinner don’t forget to bring something for the raffle! The names and food ordered are attached to the email for all those attending.
Xmas dinner at the Toby Carvery Downlands at 7.30pm for 8.00pm start this Wednesday 7.12.12
Upper Brighton Rd, Worthing, West Sussex BN14 9JN Tel:
01903 234085

And now something given to me by Paul Reilly

After the bear attacked the plane

Any geek worth his (or her) weight in salt will tell you that one of the most necessary tools for ad hoc repairs is duct tape. In fact, the one thing geeks don’t use it for is to tape ducts. I’ve known people who have used duct tape to mount a hard drive, weather-proof a camera, build a cantenna, make ice skates, and affix a flash defuser for a camera. But nothing my super-nerd friends have done compares with the story that comes to us via forums of ArmyParatrooper.org, where user lz_NorthPole shares this tale from the Alaskan wilderness. A fisherman chartered a small plane to fly into the Alaskan backcountry for some fishing. The fisherman unwisely left fresh bait in the plane, which attracted a bear–this being bear country and all–and the animal then tore the airplane apart. The image you see above is the trashed plane.  But the charter pilot supposedly was a bad-ass. And like a bad-ass he wouldn’t just let a bear get away with tearing up his airplane. No, this bad-ass–who must be a geek–called another pilot to ferry in new
tires, sheet plastic, and three cases of duct tape.  lz_NorthPole claims the pilot applied the materials, flew the thing home, and arrived safely. I fervently hope he is not playing an early April Fools’ joke, because this is the best use of duct tape I’ve seen in a long time. What you see above is the before. The “after” shot is after the jump. Take a look and tell us: do you think this story (and plane) flies?

Some time ago Alan Weal asked fellow British Airways pilot Terence Henderson to give one of his interesting talks to the Southern Strut on his experiences as a Concorde pilot and Concorde pilot Instructor. The meeting took place on the 2nd. November 2011 at Shoreham Airport and was attended by over 30 Strut members and friends. This talk was dedicated to the memory of Alan who was tragically killed in an air accident at Shoreham earlier this year.

Alan worked with Terence running an airline and always called Terence “Boss”. In the office Alan always sat with his back to the door, whereas Terence sat facing the door because he could then see out of the window which enabled him to look out of the window and keep an eye on Freddy Laker (their closest competitor at the time) who had his hanger next door.

Alan looked after the office when Terence was away and before Terence left he would say “What do you want me to do today Boss? Terence usually said “can you deal with the correspondence in the in and out trays, deal with any phone enquiries and make any decisions you feel necessary”. Terence knew that when he returned everything would be in order, paperwork completed and filed, phone calls logged and any company decisions carried out. Terence said that Alan was perfect and never ever made any mistakes and in fact would come up with some excellent ideas for the company which he would not have thought of himself. Terence said that he had many happy days with Alan and together with other Strut members and friends, Alan will be missed.

Terence has a multitude of interesting Concorde stories and to start off he told us about the round the world trip which started in New York in 1997. The Concorde was originally designed to seat 130 passengers, but the eventual B.A. design was changed to accommodate 100 seats. This was quite an expensive trip mostly made up of American passengers and cost 55,000 dollars for a 28 day vacation.

They would fly to many exotic places and hotels and would stay for two or three days. The first leg of the trip was from New York to Dallas, then on to Hawaii, Fiji, New Zealand,
Sidney, Guam, Deli, Nairobi, Luxor, and London. The passengers were then flown back to New York.

The Concorde flew at 60,000 feet at a speed of Mach 1.99 to 2.04  When asked if he had any world records Terence said “Of course, but they are not mine it was a group effort and we have many world records, but due to the nature of the aircraft they will probably never be broken”.

The Concorde has been seen many times flying in formation with other aircraft, such as the Red Arrows, but they had to be very careful to fly clear of the massive vortex generated by the Concorde wings.  To assist with the positioning, the leading edge had a mark on it for the pilots to aim at. Many photographic sorties were taken using Lear jets but the Concorde had to fly as slow as possible so that the jets could keep up.

The Concorde had a worldwide fascination and would attract many people from far and wide to witness its landing and take off. Many thousands of people used to flock to certain airports when the Concorde was due and one airport had an influx of a quarter of Million to witness the occasion.

When the Concorde took off it was always at full power with re-heat and due to the fact that the exhaust gasses were at supersonic speed, the flame had a diamond pattern caused by the shock waves. Also being supersonic one of the disadvantages of Concorde was the noise that the four mighty engines produced.

The Concord although being an iconic aircraft, had no preference at any airport and had to join the queue for landings and take-offs which meant that it could use a ton of fuel just taxiing. However, Terence said that one bonfire night they were waiting in a queue of aircraft and were number six for take-off. There were hundreds of fireworks bursting in the sky and a radio message from a German aircraft asked the tower if they could take off after the Concorde, seconds later another aircraft asked the same question and before they knew what was happening the Concorde was number one for take-off. The Concorde accelerates from 0 to 300 mph in 30 seconds. The Concorde took of trailing its four diamond shaped exhaust in the darkness and after a set time due to noise abatement rules, the Concorde banked and immediately switched off its reheat leaving just its strobe and navigation lights flashing. This is what all the other aircraft were all waiting for and a message from the tower said “That was the best firework display of the evening.”

All Concorde flight crews flew at Mach 2 longer than all other military pilots put together due to their sustained high altitude flights without re-fuelling. Lightnings and other military aircraft could fly at Mach 2 but only if they used re-heat constantly which meant that they ran out of fuel very quickly. Some military aircraft can attain speeds of Mach 3 at 80,000 feet, but only by using constant reheat. This meant that they constantly had to slow down and descend to an altitude of around 15 to 20,000 feet to meet up with a subsonic tanker to re-fuel. Once fuelled up, the aircraft had to zoom up to its operational height and speed and then carry on to its next re-fueling point. This constant cycle would continue until it reached its destination. Therefore if the Concorde and the fighter were to depart at the same time for the same destination, the Concorde although the slower of the two would arrive first because it had to make no deviation in course or speed or have any need to re-fuel.  The other advantage of flying Concorde on this trip is that there is no need to wear a flying suit, a survival suit, a helmet and sit in a cramped cockpit for hours.

The Concorde had a superb fly by wire programme and most modern aircraft now fly with this system. Even the American Space Shuttle which has a similar shape to the Concorde used this technology although they did have a small problem with the final stage in the landing which meant that most of the landings were automatic. The problem was not due to any mechanical or electronic problems, but due to the reaction time of the human brain in certain circumstances. This problem was never fully corrected in the Shuttle as it had only a limited number of flights in its programme and they felt that the additional cost was not warranted for any more modifications.

After the disastrous Paris crash the Concorde fleets were grounded until modifications were carried out. After the modifications were completed and the aircraft cleared for flight, the pilots and crews had to undertake a retraining programme which consisted of training on the flight simulator and a week of circuits and bumps at Shannon Airport and Terence said they had a fabulous time and enjoyed the great hospitality of their hosts.

As most members know, Terence has his own ex RAF chipmunk and is a keen glider pilot with two vintage gliders. Apparently next year they are hopping to stage an international Olympic gliding competition (the first since the 1940’s) and so far around 40 people have signed up to compete.

This talk by Terence was appreciated by all the members attending and was a fitting tribute to Alan who will be missed.

Ps It was a good turn out with 40+ people present.

Some members chatting. (It's what they do!) 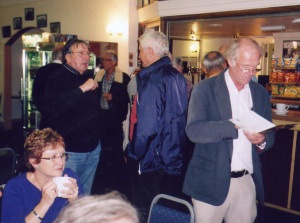 Time table of Strut events for 2011

Dec Xmas dinner for member & partner (free to paid up members)if have not booked then it is tooooooooo late!