Approximately 50 miles north of Seattle, Washington is the small city of Arlington. Arlington is famous in aviation terms as being the home of the Glasair and Glastar homebuilt aircraft but also the base for the Northwest Fly-in.

The EAA Northwest Fly-In is the third largest in the nation, after Oshkosh’s EAA AirVenture Oshkosh and Lakeland’s Sun N’ Fun. And the largest on the West Coast of the USA and offers a great fly-in opportunity for pilots to get together. With the airport only being about 40 miles from the border it also gets a good attendance from aviators in Canada. 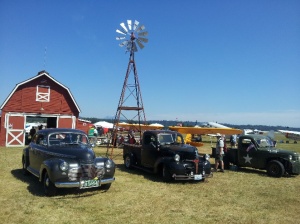 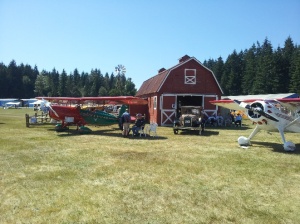 her running up to the show was excellent so attendance was going to be good. The show last 3 days (Thu-Sat) but having a few hours off work I made it over on Friday afternoon. The fly-in has all the traits of the other US shows with a good general fly-in, camping areas by aircraft groups, exhibitors, aviation forums and a daily air show. On Friday night they also had an evening balloon burn up and a small night air show on the Saturday night. Each evening a flight related movie was shown on a large outdoor screen with the recent blockbuster Gravity on the last night. 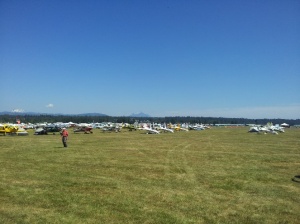 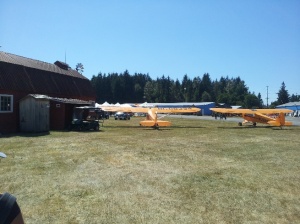 I made it there for the afternoon displays which was varied and entertaining with a Boeing Stearman and a pair of Harmon Rockets showing. After walking the flight lines there was a good turnout of Pipers, Cessnas, Canards and RV’s with Van’s only being about 1 ½ hours flying (in an RV) south of the site. The field also had some beautiful examples of some vintage aircraft as well as some military displays and ground equipment such as tanks. 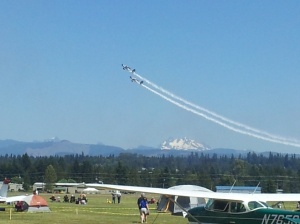 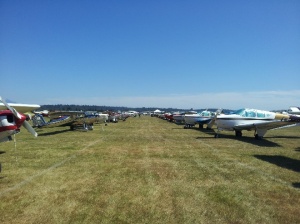 The airfield exhibitors were limited compared to the Big US shows but probably on par with the LAA rally. At the other end of the airfield was the light flight area, which had some powered parachutes and ultralights displaying.

So what was new….

Flight Grip is an Oregon based manufacturer of control column grips. These grips look well-made and robust and have a real clunk for each switch function. The grips are customisable and for left and right handed arrangements with the basic model including a trigger PTT is priced at around $126 (£75) each. Although the company does’nt appear to have a website, their products can be purchased through Aircraft Spruce http://www.aircraftspruce.com/catalog/elpages/flightgripbushings.php 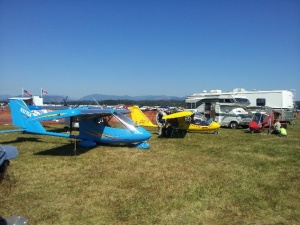 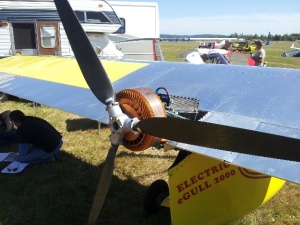 The first installed in his aircraft was a Joby Electric Motor that produces the equivalent of the 27hp. Next to his aircraft was a larger electric power system that produced 55HP from the largest electric motorbike manufacturer called Zero G Motorcycles. This system does appear expensive on face value $17350 (£10,500) you take in the cost of a new Rotax 582 plus the gas and maintenance (remember the electric motor is zero maintenance and the battery is good for 3,000 recharge cycles it doesn’t actually work out too expensive. Each charge costs $1.50!! The airframe kit is a little expensive at $16,000 and a ready to fly version being $26,000 plus the engine system but there are a few 2nd hand aircraft on the market at varying price. All of which fit in the new SSDR category, you could end up flying one of the first electric aircraft in the UK. I am tempted with that sort of de-regulation. There was a good selection of the aircraft at the show, most slightly better finished that Mark’s demo aircraft that has certainly been well used and is an ongoing test bed. Maybe a bit of TLC before another engine option! Nice article on this aircraft can be found here. http://experimenter.epubxp.com/i/339662/0

Andrew gave an entertaining and informative illustrated talk on the pioneers of early aviation in France.  During the talk he handed round an exquisite model of a Santos-Dumont Demoiselle (“Damselfly”).  With its strikingly simple triangular open fuselage and alternative mounting positions for the engine it looks like an excellent basis for a contemporary SSDR.  This and a whole host of early designs show the French certainly had the edge in style 100 years ago!

The WordPress server where the Strut website is hosted keeps a record of visitors to our site.  Here is the picture since February 2012. 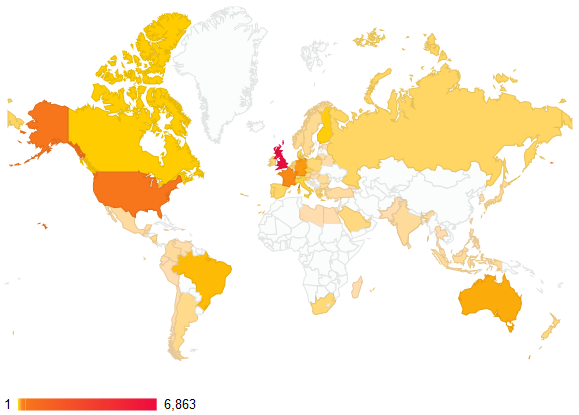 The total number of views in that time has been nearly seven thousand.  The score for the top ten countries is:

Of the total 75 countries perhaps the most surprising is Réunion, a small island located in the Indian Ocean, east of Madagascar, about 200 kilometres (120 mi) south-west of Mauritius, the nearest island! [Wikipedia]  They made one view.

Maybe some of the visits are accidental, but certainly those from countries at the top of the list were looking for us or a related aviation topic. 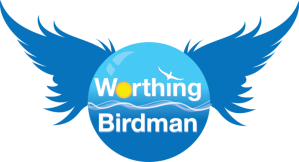 The £10,000 prize for a flight of over 100 metres was won for the first time during the Worthing Birdman competition, 12-13 July 2014.  Geordie Ron Freeman flew 159.8m (524ft) in his adapted hang-glider, beating fellow competitor Tony Hughes who was first to break the 100 metre barrier ten minutes previously.

There’s a nice video article by the BBC here.  The official website is at: www.worthingbirdman.co.uk/

Are you a PFA History Collector?

Arrivals are strictly PPR only. Please ring 07790669163 or 01323843883 before take-off please ring to confirm local conditions, wind speed, runway in use etc. Announce your intentions & location on the SAFETYCOM frequency 135.475 MHz. Please do not make unnecessary noise and do not buzz the field or over fly Michelham Prior. There are now Llamas, Alpacas, Rhea’s, Emu’s and Reindeer in the Hotel grounds so please do not over fly the Hotel grounds. Fly in any time, food will be available from about 12.00 onwards. 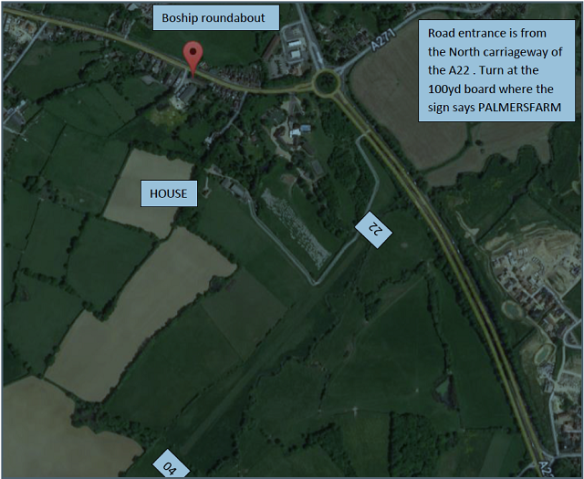 Goodwood based aviator Richard (Dickie) Bird will give an illustrated talk on:

“Goodwood to Cape Town and back……… in a microlight!”

For a list of the currently planned events look under the menu above or click this link: Events