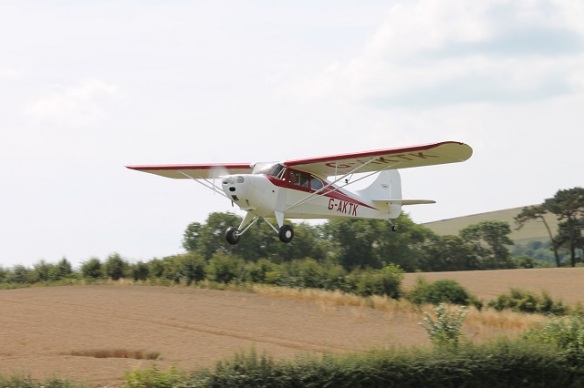 The Aeronca 11AC that Tony Batchelor has been restoring (see February’s newsletter) helped by Javid Azadi, is back in the air!  First flight was at the hands of test pilot Dave Cooke, Saturday 4th August at Swanbrough Farm.  The aircraft leapt off the ground after a very short run and flew beautifully with no major issues at all.  Congratulations to all involved.

As many Strut members know, I have been building a Bristell over the past 13 months or so. The build has been almost full time – like going back to work, in fact! I thought it was going to take about 6 months but was completely wrong. Anyway, after the usual ups and downs of building an aeroplane, it was ready to fly in late May. On the chosen day for the test flight, 5th June at Goodwood, the weather wasn’t ideal with not very good visibility and a cross wind on the runway in use. However, test pilot Farry decided that the conditions were OK.

I watched my plane leap into the air after what looked like about 50 metres – considerably less than all other aircraft flying that day – and climb away. After Farry had landed and taxied in he said that all had been fine and the plane flew well but the electric elevator trim was working the wrong way round. This was quickly rectified by switching 2 wires but the fault was down to me I am afraid as I had done the wiring for the trim servos. After that I was able to join Farry for the next and subsequent flights as observer and we managed to complete the test schedule the same day.

I am very pleased with the aircraft and the way it flies. It is not quite as sensitive on the controls as my RV9A but is more stable – you can let go of the controls for a few seconds without it going completely off course! A pleasant surprise has been the Rotax engine, with which I have no previous experience. It is exceptionally smooth and completely free of vibration and of course very economical on Mogas. All in all I am very glad I built a Bristell, but this is my 4th and definitely last aircraft building project as I am getting too old for any more!

Finally, very many thanks to Ian and Ann Charlton for letting me use a corner of one of their barns for the first 9 months of the project and also to Farry for all his advice and guidance and the use of his specialist tools. Thanks also to the many people who visited the project both at the farm and at Goodwood and generally cheered me up.

Lasham Gliding Society is strongly opposed to the CAA’s decision. Contrary to the statements made in the CAA decision document, Lasham Gliding Society considers that the decision to introduce new controlled airspace has not been justified by the CAA: it will create a choke point, it does not represent an efficient use of the airspace and it does not properly or reasonably balance the needs of all users. The consequence of the implementation of this large volume of controlled airspace, at the request of a small airfield which has around 28,000 annual (non-public) movements, will be to displace many times more transiting flights and to cause significant congestion of general aviation movements outside the controlled airspace. Lasham Gliding Society, the world’s biggest gliding club with around twice the number of annual movements of Farnborough Airport, will be in this bottleneck. This gives rise to obvious safety risks for gliders and other aircraft.

The CAA has not published any data or evidence to support its decision that the new arrangements will be safe (or that the existing arrangements are not safe), and it has not published any analysis of the impact on Lasham Gliding Society or general aviation traffic in the choke points. Further, the measures suggested by the CAA for mitigating the serious safety risk are inadequate and ill-conceived.

In the course of the decision-making process, Lasham Gliding Society in partnership with the British Gliding Association and the General Aviation Alliance, engaged with the CAA in meetings and in writing to explain the problems with the changes proposed by TAG Farnborough. The same parties also submitted a practical and safe alternative airspace design at the request of the CAA. Notwithstanding this, the CAA has proceeded to approve TAG Farnborough’s proposal with only minor modifications.

In these circumstances, Lasham Gliding Society has taken legal advice and will be writing formally to the CAA asking it to withdraw its decision. If the CAA does not withdraw the decision, or provide information properly justifying it, Lasham Gliding Society will consider all options including a legal challenge. If you are interested in providing financial support to the Society to help it to challenge the CAA’s decision, please contact the office at Lasham.

If this does go to judicial review it ain’t going to be cheap;  they will appreciate contributions.

An excellent turnout for the extremely convivial  garden party at Palmers Farm.  Here are some random pictures by me (RG) and Richard Hasler.  To see them a bit larger, click on the picture.  Apologies if your aircraft was there and didn’t get snapped; I arrived a bit late in the afternoon (RG).

Farry about to demo the amazing handeling characteristics of the Bristell 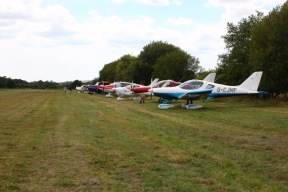 Nice colour scheme for the type

Many thanks to Tony and his wife for the effort they put in to make this a memorable event.