Written by three independent authors with combined experience of microlight, SEP and higher performance commercial and IFR flying and instruction, and PhD work in causal factors.

The key points to avoid infringement seem to be:

In September 2020 I ordered a new Lang 604 propeller from Hercules Propellers for my DH82C Tiger Moth because the original propeller fitted was a fine pitched unit because the plane was designed to just go up and down while training WW2 pilots in Canada. The fine pitch prop would have also suited it use from 1948 to 1954 when it was operated on floats in the summer and skis in the winter, it was never a go places airplane.

I went to the factory in Stroud on a very wet day and had a conducted tour and was interested in the manufacture of the propellers generally and also the blades that Rubert was making for the Dowty inflight adjustable propellers used on the Rolls Royce Merlin.

For the standard propellers he uses laminated Beech planks which have a good tensile strength to weight ratio. Mahogany can be used but at a premium, as it is a banned import species and it can only be obtained if it was imported before the restrictions. Metal leading edges can be added but at a premium as it takes many man hours. 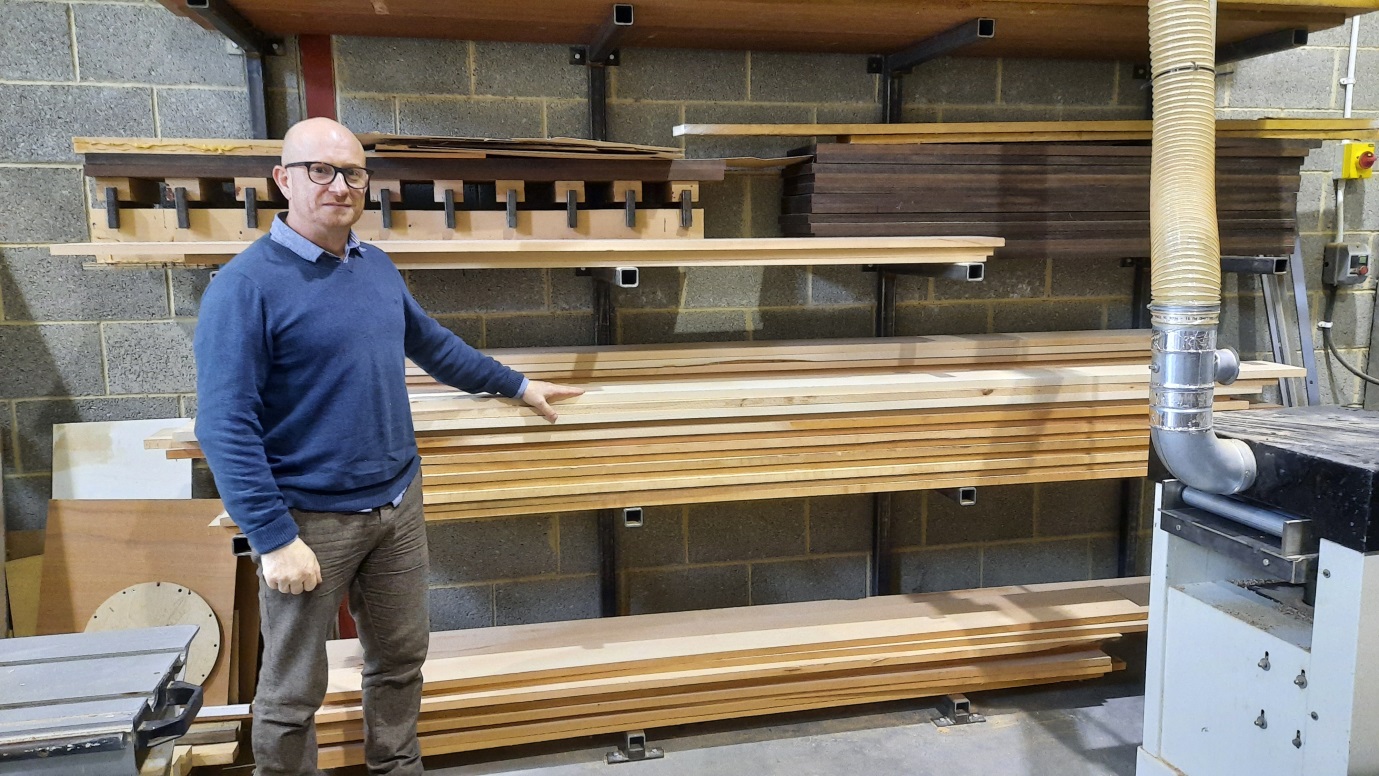 Rupert standing in front of the raw material rack

The Building stages to produce a standard wooden propeller for a light plane are:-

Stage 1:  Rough cut the planks to size and glue them together with Aerodux, fit into the heater and clamp them down. Leave to set for 6 hours at 45 degrees C.

Stage 2:  Put the blank into the CNC machine and rout the leading edge pocket, fit the precast Urethane leading edge into the pocket and glue with Aerodux and again heat and wait.

Stage3:  Put the blank back into the CNC machine and rough cut the shape using a tungsten carbide ball nose cutter. Change cutter and do the final cut.

Stage 4:  Hand finish the prop using an orbital sander to remove the machining marks and checking thickness per the drawing etc at regular intervals. The tips are completed by hand using templates as the CNC machine had gripped the blade at these points.

Stage 5:  The Paint is applied in a heated spray booth and can add up to a fair number of different setups (mine had a lacquered wood centre with matt black back, gloss black front and yellow tips) and then it is balanced.

During the tour Rupert demonstrated the toughness of the leading edge by smacking a sample against the machine with no apparent damage.

Rupert showed me a propeller for a very unusual plane that he had made recently. It was a Finish VL Viima 2, I was interested as I have close connections with Finland (and was wearing my Finnish WW2 fighters Tee shirt on the day) and having been to most of the aviation museums and have probably seen one in the flesh so-to-speak. The owner had a copy of the original propeller drawing and Rupert was able to generate a 3d model which was converted into a file to drive the CNC lathe. The engine is a German Siemens radial. 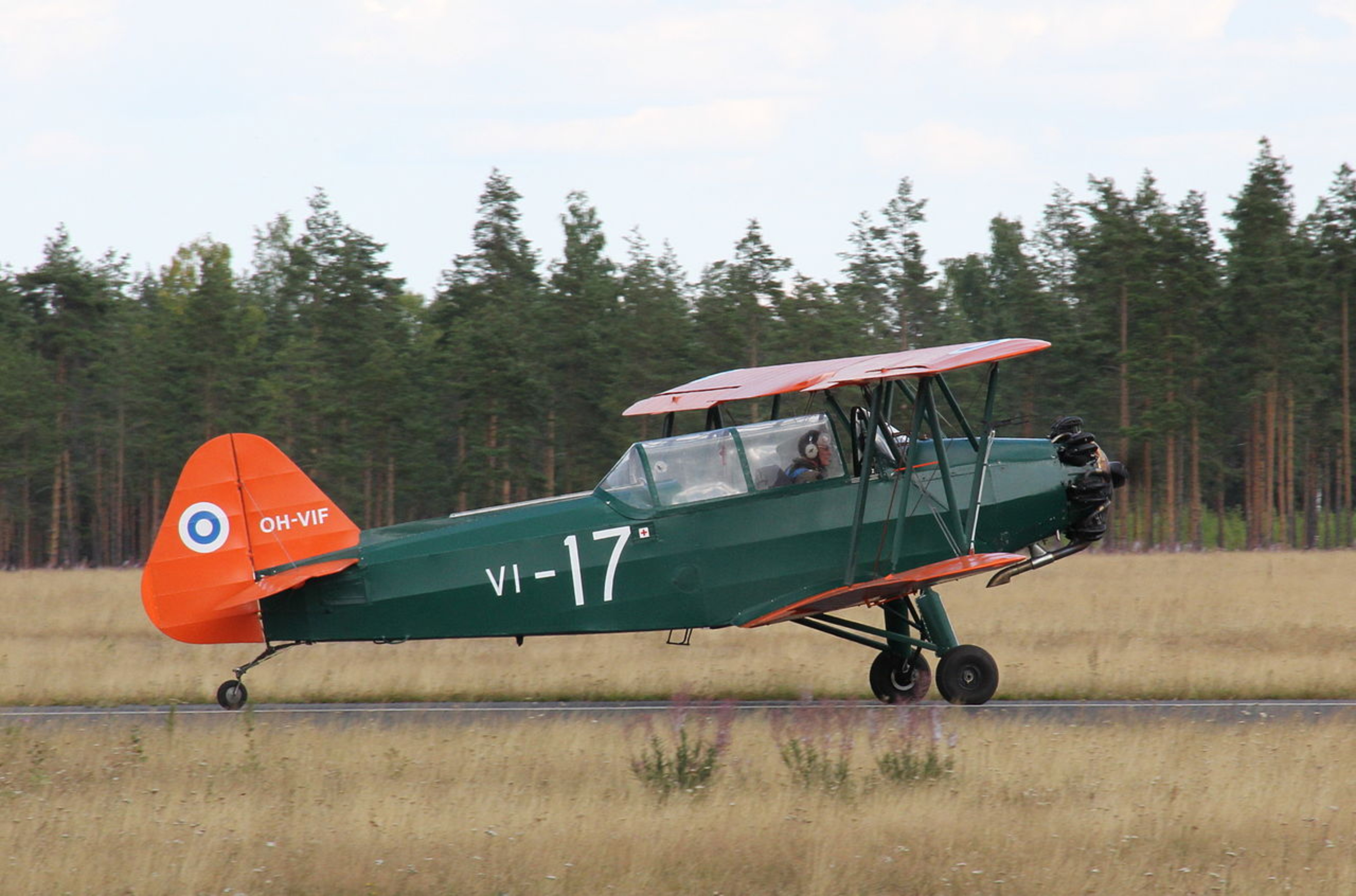 The laminating process is carried out in a heated press for 6 hrs at 40 deg C.

This is the CNC machine which roughs out the shape of the propeller blades. In the picture above the slot for the Urethane leading edge is being routed out

Curing the glue that attaches the Urethane leading edges that have been installed into the slots generated above. 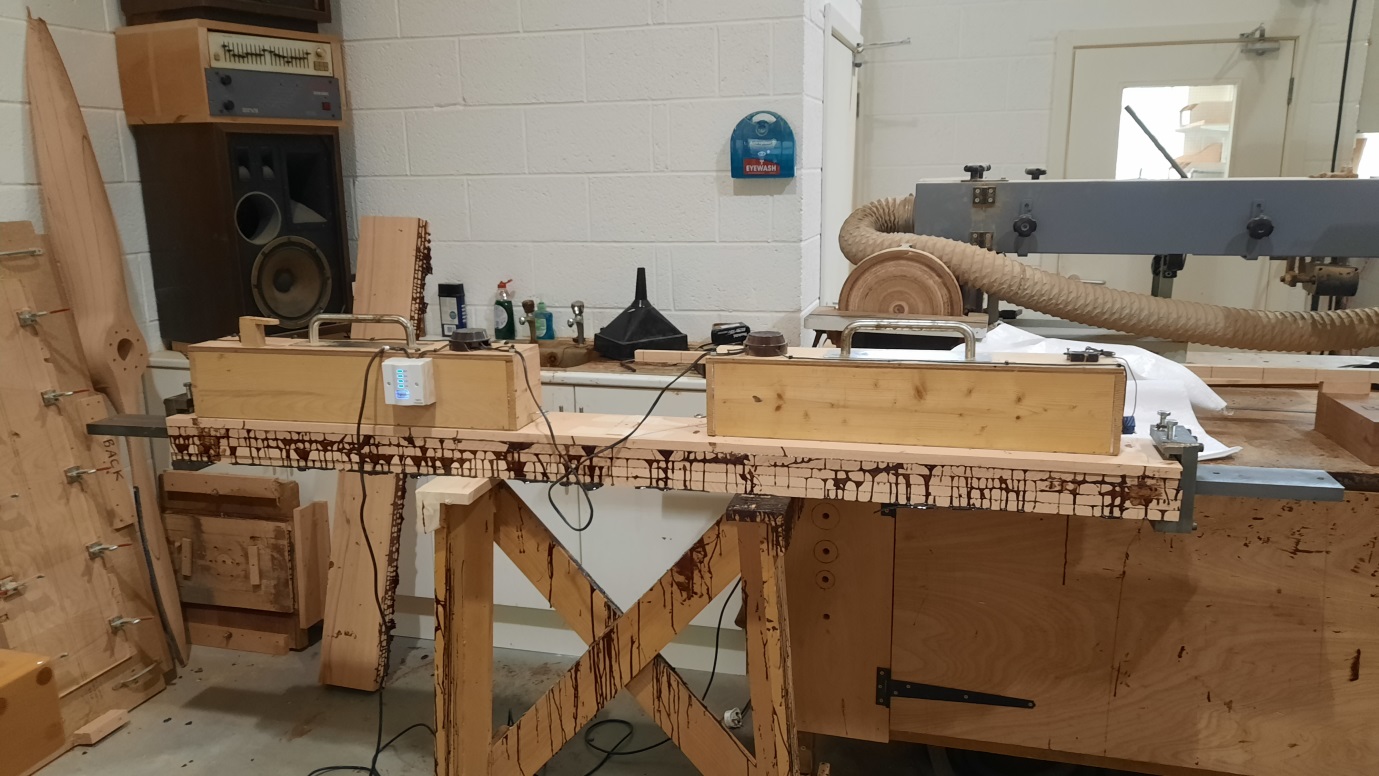 Another of the CNC machines available 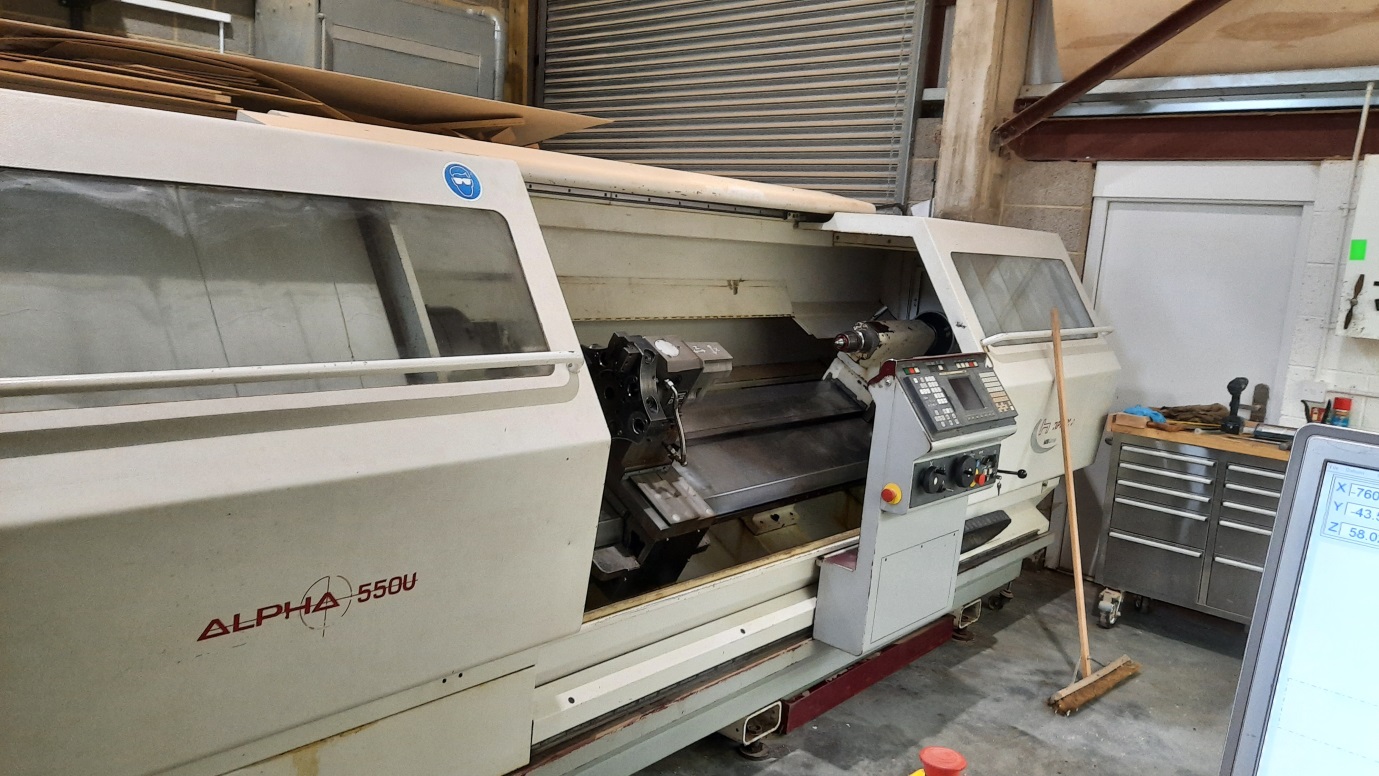 There is a demand for blades to fit the Dowty wooden bladed constant speed propellers as used on the Merlin when installed in the Spitfire, Hurricane etc. Rupert looked into the manufacture of these and when they were in production in WW2 they used very hard wood and compressed them to create a denser material. Rupert buys the raw material from Germany and he glues the planks together as per the normal method and machines them on the same CNC machines as his normal blades, so that the final product is no doubt better now than they were in WW2.

The balancing of a set of blades is very exhaustive and is done on a fixture in different directions to very fine limits using lasers for accuracy.

The prototype has completed its CAA flying tests in the hands of the Heritage Hanger where they screwed it to the front of a Spitfire and took it to VNE and many other limits and it was found to be very smooth no doubt due to the time and effort in the balancing process.

Above is the raw material which Rupert gets from Germany.  It is Hydulignum which has been laminated using ultra-thin ply’s and is subjected to 3000 tonnes during manufacture to densify it and it weighs 80 lbs per cubic foot. 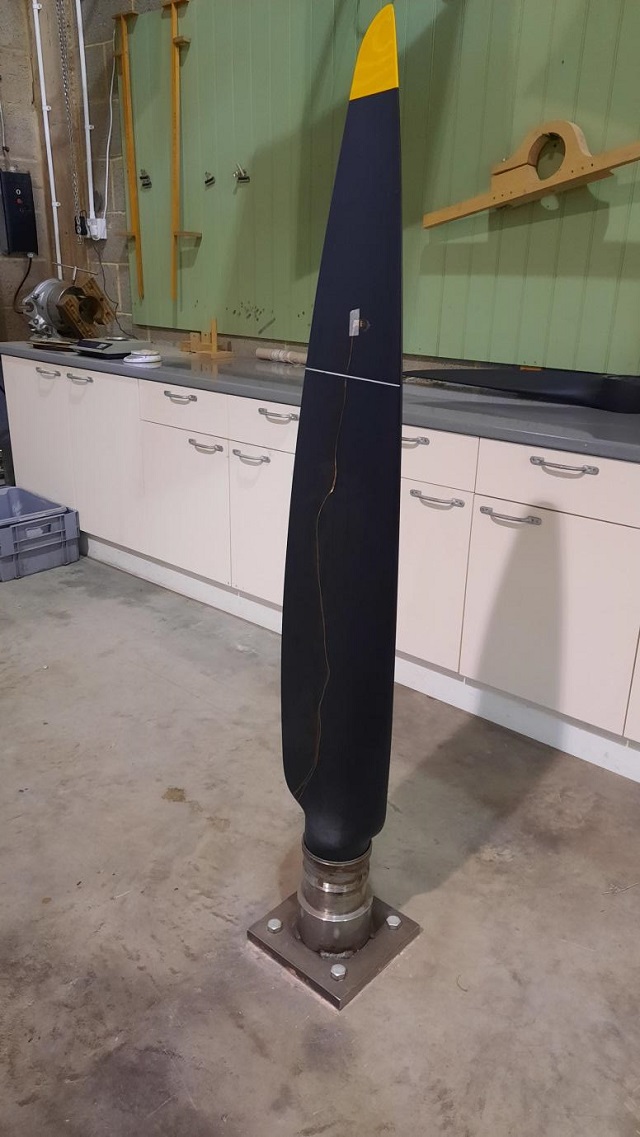 Above is an early prototype Merlin blade fitted with an accelerometer which was used to identify the blade natural frequencies.

Hercules is also refurbishing the blades of the Aircraft Research Association transonic wing tunnel in Bedfordshire. The aircraft industry had a requirement post war for such a device, it was conceived in 1948 and was working by the early 1950’s and was used for testing the TSR2, Concord, Lightning and many other post war jet fighters that we were building at the time.

The tunnel is capable of wind speeds in the venturi section of the tunnel of Mach 1.4 (approx. 1000 mph) and has 2 off 40 foot diameter fans with 20 blades per fan to produce the motive air flow.

There are still only a few wind tunnels in the world with this high speed capability and the wind tunnel is still in use. 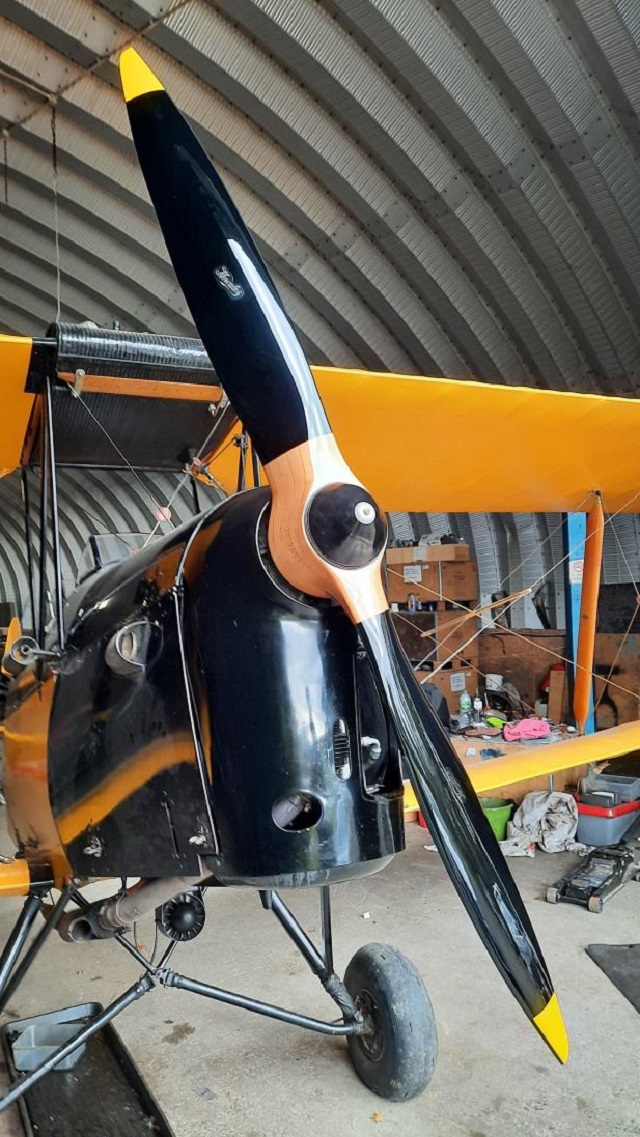 The propeller I picked up was really too nice to use, it should have been on my wall indoors but anyway I fitted it with no problem and tested it and it gave me a better rate of climb and a better cruise speed and it was lighter!  More expansive tests to follow (weather permitting)

Get a Briefing on Electroninc Conspicuity and PilotAware

In case you didn’t get this invitation directly from LAA HQ:  The LAA West Midlands Strut is organising a lockdown ‘Zoom’ meeting for Wednesday 18th November at 19:30 with Keith Vinning OBE to discuss the recent Electronic Conspicuity initiatives and the updated Pilot Aware technology. They have extended the invitation to all LAA members. Just click on the link below and load from there. The meeting can be viewed via Laptop, tablets and even your phone!