We will be having a simple fly-in at Palmers Farm on Saturday the 1th of August. Bring your own picnic (inc drinks) and blanket to sit on. We will not have any food or tent this year. Eat by the plane or car and keep a sensible distance when you are talking to others. Abide by whatever rules are current.!!!!!!!   Download the airfield details as a pdf here:  Airfield info 1.8.20

Also planned to be Covid compliant.  More details will be circulated nearer the time.

There will be no club nights for the foreseeable future; we will inform you once the restrictions are lifted. Might be possible soon but not everyone will feel comfortable coming for quite a while.

We seemed to have made significant steps over the last month cumulating in the engine being hung onto the front of the plane. 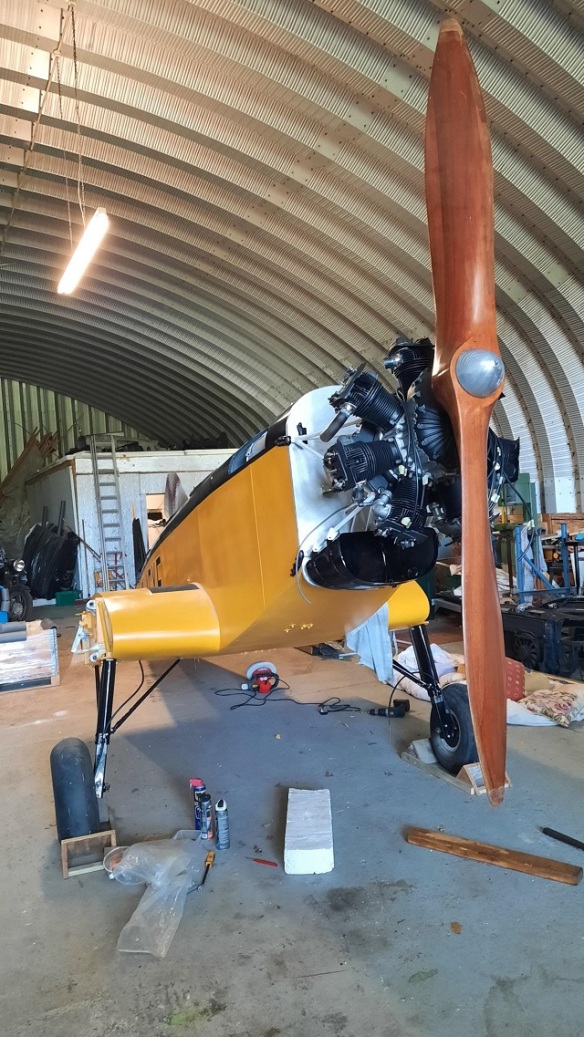 The nicely painted modified engine mount fitted to the engine with our modified bolting system and the bottom bolts on the firewall fitted perfectly but the top left bolt would not go through. We had built a jig for the mount and tack welded it but when the welder had fully welded all the joints there must have been some distortion with the welding process on the one node. So we had to swing the mount down and heat up the tubing adjacent to the node and pull it into line. The paint of course will have to be touched up with some primer and two pack white paint.

We fitted the engine and then we had the fun part of dressing it up with the prop, spinner, oil tank etc. 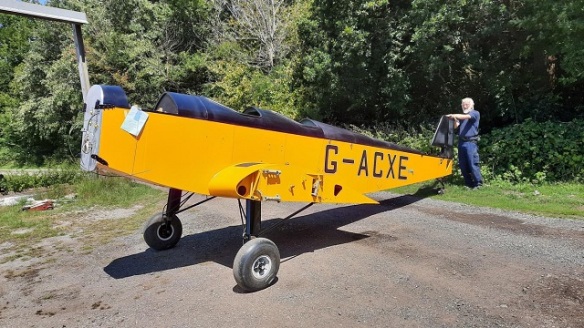 G-ACXE being moved to the main hanger

We are now busy at working out all the system hook ups ie there are two shafts forward of the firewall which control, throttle, mixture, advance and retard of the magnetos. Then there is the engine oil lines which go through the carburettor, oil cooler (rebuilt as original by the guy that rebuilds Moth petrol tanks) oil tank. Then there is the fuel system forward of the firewall (3 lines) which will have fire sleeve over them and the oil pressure line to the cabin. 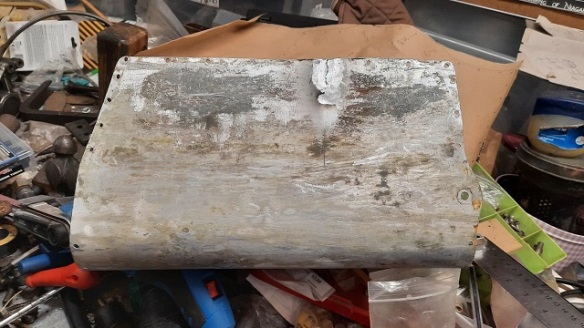 The undercarriage was still in hand painted grey which looked wrong so we jacked it up and removed the left leg. We repainted the left side in gloss black, skinned the brake cable with shrink wrap and rebuilt the leg. This was a useful exercise as the previous owner John had built them and we had no knowledge of what made it tick. The week before I had been checking out the brakes on the Tiger Moth and these brakes were identical so I was able to copy the springs that hold the shoes back to the back plate. The right side leg fairing had been damaged at some time, probably pre 1939 and I assume John had filled the dent but the rivets down the back edge were submerged in the filler and brush painted in grey. So we removed the fairing and I knocked out the dents but it was not possible to get them all out so I de-riveted it and laid it out flat and then put it through the English wheel to iron it out. In the accident it had torn the metal so I had a go at Aluminium “soldering”, I used a Zinc/Aluminium alloy rod which melts at a lower temperature than the parent material to repair it. We discussed whether to use filler again to disguise the repair but Jim was for leaving it for all to see, so it was just painted.

The Light Aircraft Association and Pooleys Flight Equipment are launching a sport flying video competition which allows LAA members to share their passion in a competition to submit a video of their aircraft or their flying. It could be a documentary discussing your build or restoration project, its challenges and ups and downs. Or it could be a fast-moving, action-packed film with multiple shots showing your hot ship or vintage biplane dancing amongst the clouds, edited to dramatic music.

The format and content of the video is entirely up to the participant. So long as it is between 1.5 and 15 minutes in length and demonstrates the fun that can be had with an LAA permit aircraft.

A £1,000 prize fund will allow winners to choose from up to £500 of Pooleys flight equipment and merchandise, and the top three entries will have free LAA membership for 2021. The competition is only open to LAA members, but everyone will be able to enjoy the results, via the LAA YouTube channel and Facebook page (see  lightaircraftassociation.co.uk/2020/News/video_comp.html).

The competition concept was the brainchild of LAA engineers Mike Roberts and Joe Hadley, who are keen to point out that any member can contribute. “With over 7,700 members and 2,800 active aircraft of different shapes, sizes and capabilities on the LAA fleet, we are all united in our love for flying” says Mike Roberts. “You don’t need an expensive camera. Suitably edited mobile phone footage will do. In addition, older footage can also be used. The aim of this competition is for members to share the enjoyment of their aircraft with families and friends, and to capture that fun in an engaging, exciting manner. We’re really looking forward to seeing the results”.

Sending In Your Entry
Once the final edit is complete, the video should be uploaded to YouTube where a link should be made to the LAA YouTube channel. Entrants then send a copy of the link, with their name and membership number to office@laa.uk.com headed Video Competition, and the title of the film. We recommend that it depicts the video accurately; ‘Long-EZ Cloud Chasing Fun’ or ‘A Taylor Monoplane Build Diary’ for example.

Each submission will be required to comply with the following criteria; 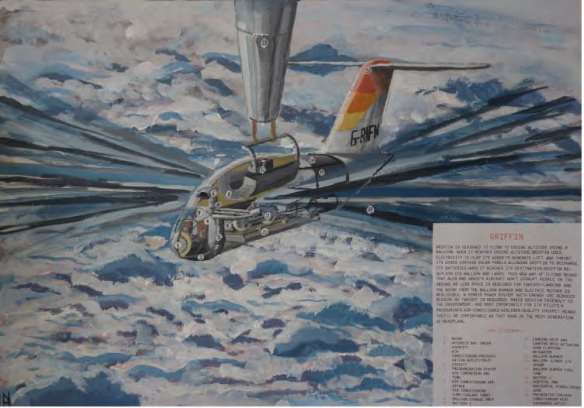 A spectacular winner has emerged from the LAA ‘Kids at Home’ aviation art competition organised for five to 15 year-olds conjunction with the Shuttleworth Collection and Guild of Aviation Artists. The competition was launched in March to encourage children deprived of school and with parents looking for activities to keep them amused, to try their hand at designing or drawing an aircraft. An eye-catching ‘e-poster’ from Phil Jackson of GAvA triggered a bumper response of young people putting pencils, crayons and felt tips to paper, with entries being posted or e-mailed to LAA HQ.

The stand-out entry was the ‘Griffin’ ornithopter, designed by 15 year-old Nick Harder. His design would be lifted to altitude by a helium balloon, with solar-rechargeable electric power providing lift and thrust via the flapping wings.

“The picture’s presentation and creativity made it stand apart” said LAA CEO Steve Slater. “We were so impressed that in addition to the main prize of a family ticket for an Old Warden Air Show in 2021, we’ve made him an LAA member and invited him to join us for a day at LAA HQ too. He’s got just the sort of design talent we need for the future!”

First prize in the 5-8 year category went to Bessie Revell and first prize in the 9-12 age group went to Sebastian Wright. All showed real talent and imagination in their designs, as did many of the runners up. Congratulations to all who entered and the LAA hopes that the diversion of an art competition during lockdown has helped to give some added interest to long days at home.

The LAA is also continuing to work with the Royal Aero Club to facilitate UK entries for the FAI International Aviation Art Contest, with the world’s sporting body announcing a title for the 2021 contest which is very appropriate to the times in which we find ourselves. The title “ A Friendlier World with Air Sports” encourages participants to create a picture to illustrate how friendships are made via aviation across the world. The UK competition will close on 31st January 2021.

That includes things like wing-walking and warbird experience.  If so, you may want to contribute to the CAA’s consultation on a new edition of CAP1395 ‘Safety Standards Acknowledgment & Consent (SSAC)’.  Details are here: consultations.caa.co.uk/ga/ssac-cap-1395/