Alpha Alpha has a full permit and is now in use.

And here’s a lovely pair of Bristells!! The demonstrator fleet.

We have modified the existing engine mount such that the top horizontal plane is now different from the lower one. This is to stop the Pobjoy mechanical fuel pump from fouling the mount as the mount was for an earlier engine model. We have to submit the change to the LAA. The pistons, rods and gudgen pins have come back from Cox and Turner.  With the engine we had a new set of 0.0005” oversize gudgen pins which did not fit in the small ends or pistons. The original pins were worn and the clearances were above the allowable limit, the small end bearings were worn asymmetrically. So the answer was to have the piston gudgen pin holes and the small end bearings honed out to suit and now we have the tolerances back to as new condition.

The coating of the wood surfaces with polyester resin is progressing as we gain more experience with different techniques, we will be experts just as we finish!!

At long last I have received the permit to fly for the DH82C and I have started my conversion with Tony Berryman.  Tony gave Lesley (my other half) a ride in the Tiger see photo below. 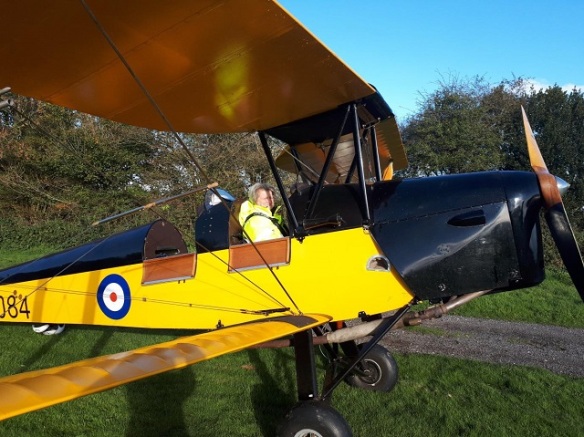 Taken some nice snaps from or of aircraft on your latest trip?  Don’t keep them to yourself; share them here.  To kick off what I hope will be a regular feature, here’s a couple from  a recent trip. 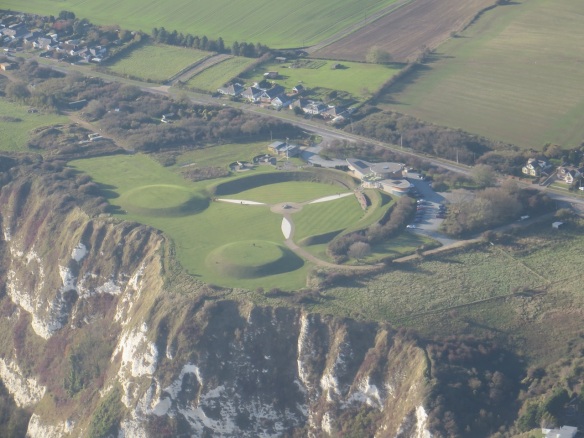 The Battle of Britain Memorial near Dover.

The remnants of RAF Hawkinge.  Reputedly the aircraft are actually mock-ups left over from the making of the film “Batle of Britain“.  Just after I put the camera away, a real Spitfire flew past!

The Strut has historic links with Shoreham Airport, the site of our regular meetings while still in local Council ownership and a past venue for our fly-ins, so members my be interested in current developments.

The controversial developments on the Monks Farm site alongside Shoreham Airport of a 600 homes housing estate and an Ikea superstore, has recently been approved by the local planning authority.  However the All Party Parliamentary Group on General Aviation (APPG-GA) have written to the Secretary of State for Housing, Communities and Local Government asking him to ‘call in’ the plans for further consideration of the effect they may have on the viability of the airport.  Further details here: generalaviationappg.uk/all-party-parliamentary-group-asks-secretary-of-state-to-call-in-shoreham-planning-applications/

Interestingly, earlier in the month, Nick Bently, Brighton City Airport General Manager, gave a lecture to the RAeS Gatwick Branch on ‘Shoreham Airport – Then and Now’.  A member of my flying syndicate attended and I’ve abstracted some key points from his notes.

The provision of Air Traffic Control has been a bone of contention recently.  Developments in the Middle East have resulted in some 150 experienced controllers moving from the UK.  NATS is taking controllers from Regional airports who are in turn taking them from smaller airports, notably Shoreham.  Recruitment of replacements has been difficulty as pay rates are an issue.  However, the ATC team at Shoreham is rebuilding and shortly will have full ATC Monday-Saturday and Air Ground only on Sunday, with no breaks in the service.  But, N.B. they are not there yet; check NOTAMS!

The airport currently handles about 50,000 movements a year with up to 400 a day, though half of that total is in only 4 months of the year.  There are about 60 businesses on the airport, mostly aviation related and Nick Bently would like more of the same.  There is a waiting list of 10 aircraft for hangar space, and they are looking adding small hangars for private use, free of the rules imposed on the main hangar – so the possibility of carrying out permit aircraft maintenance.  Instrument approach licences are in the process of being renewed and it is intended to add LPV approaches next year, with a 5.5° glide path.

The airport has been running at a substantial loss until recently when the financial situation started to improve.  Certainly the airport could handle more activities to support it financially without disrupting aviation, for example car shows and night-time cycling events.  It is hoped that there will be no more music festival closures during normal operation.

Unfortunately the airshow will not be returning.  However fly-ins may be organised to generate interest and revenue.  (Should we think about organising one?)  Nick Bently also has ideas of encouraging “hangar rats” to get involved at the airport. These are enthusiastic youngsters who help out in their spare time, with the day-to-day tasks at clubs or other functions on the airport. They go on to join the industry as pilots, controllers, engineers, firemen etc.

Overall, Nick Bently conveyed an enthusiastic and innovative approach to guiding the future of the airport.

The General Aviation Safety Council (GASCo) has organised a Safety Evening at Goodwood for the 7th March 2019.  For details contact Goodwood Flying School on  01243 755 159.
Should the Strut request an evening here?

Coming to an airfield near you soon – well actually Goodwood – is a trial of Airfields ATS ADS-B display.  For the duration of the trial the ATS Units at three GA airfields will be equipped with real-time flight tracking equipment as a situational awareness tool.  Something like this has to happen.  The technology is well established and the information readily available (my wife uses FR24 to track members of the family when they are flying across the world), so ATC at GA fields should have access to it.  However, how to safely integrate the use of this additional information into operational procedures (particularly when the information supplied is incomplete; not all aircraft are transponding ADS-B) remains to be established.

The trial has been set up by Airspace for All (A4A) and their website has full documentation of the plan and the safety case.  Strut member Steve Hutt is heavily involved in the work of A4A.  Maybe we’ll get him to give a Strut talk on progress of the trial in a while.

November’s meeting, Wednesday 7th November, we will be having a talk by new Strut member Tony Berryman.  Tony has been testing Tony P’s Tiger and flies the Tigers for Duxford giving rides.  He has experience in many other machines and has just retired from BA after many years of service with them.  He is now looking forward to a retirement flying the planes he wants to.  With 47 years and 28,000 hours of flying he will talk about interesting experiences over that time.  Title of the talk is “From Comet to Tiger”.

Christmas Meal: At the Tolgate in Bramber, 7.30pm on Wednesday 5th December.

Update from Tony P:  I have looked at the club funds and have decided that we can pay for the paid up strut member and one guest.  The last date for letting me know is club night (Wednesday 7th November) as I have to pay the deposit on that day.  Please let me know the names of the people wanting to go before club night and if you are not a paid up member yet (this year see list) come along and pay your £20 annual membership and bring a friend to the Xmas dinner for free.